New Expansion for Age of Wulin on June

Age of Wulin (the european version of Age of Wushu) will release a new expansion next week (on June 16), its 6th chapter: Blood & Flowers. This new content update will introduces to the free to play martial arts MMORPG a new city, a new battleground, a new partner system, a new instance and the Flower Prince competition.

The new city, Ligxiao, is an icy city where players will have to fight as invaders or defenders, randomly joining one of the factions: Snow mountain Sanctuary, Valley of Frozen Souls or Blood Sabre Clan.

Through the new partner system arriving with Blood & Flowers, players can build loyalty and befriend other characters choosing to do so. This new ally can be summoned during battles and allows players to learn from their own Combat and Internal skills.

Once a month, the Shifting Flower Palace (one of the most secretive factions), will open the doors to male characters for the supreme title of Flower Prince. The top ranked players will be bidding and fighting to become the new Prince of the Palace, which will receive the Ancient Skill Set of this faction.

This update also introduces a new instance that follows the events of the Silver Hook Sword Boat from the previous expansion: The Island of Delight. 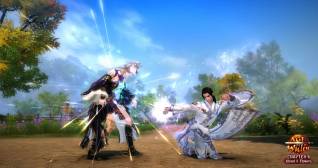 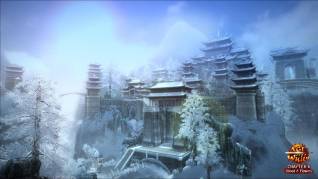