Fun and fast gameplay, easy to get into and casual enough to pick up and play

The levels are extremely short, too many graphic style, though individually they’re all good

Zombies ate my pizza is the new MMO shooter from Reality Squared Games (R2 Games), developers and publishers of such titles as League of Angels, Wartune and Magic Barrage. Zombies Ate My Pizza (ZAMP) is their newest title that recently went into open beta testing giving us the chance to try it out and give our thoughts. The game is solely browser-based and with a quick registration we were able to jump right in game into the basic tutorial mode, for the majority of the things you need to know and learn are given to you through different “quests” as you level up which unlocks new features. 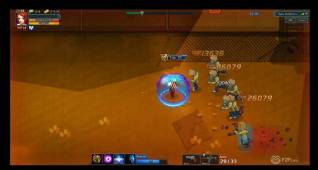 As far as the story goes, something that appears to have been completely glossed over when you start the game (and there is no trace of it on the website, but we have a press release) evil extra-terrestrial book creatures have landed on Earth and infected humankind with a virus, which has spread quickly and pretty much brought on the apocalypse. This virus turns humans brains into “spongy dough”, essentially zombies, and makes them think that humans are giant pieces ripe for eating. Dotted across the world are pockets of resistance, militias that form up to wipe out these pizza craving mindless hordelings. Yep, you read that right. It’s definitely an odd background bought and given the humorous nature of the game and constant pizza references… it kind of works. 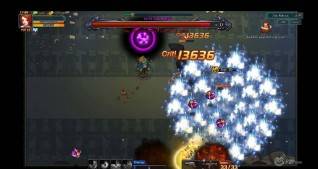 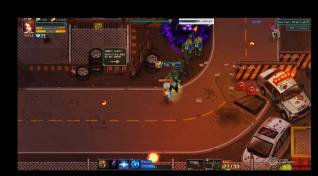 The game is pretty quick and action packed, revolving around shooting enemy mobs using your left mouse click for constant auto fire and moving around with the WASD keys, simple controls and 3-D side scroll graphics will easily port onto tablets and mobile devices so would be surprised if we don’t see that at some point. Players navigate through the levels using a variety of weapons and attack abilities, fighting back monsters that grow progressively stronger and pick up new abilities of their own such as ranged attackers and extremely fast doglike zombies packs, as well as boss mobs to take down with their own unique attacks.

The levels are instanced based and you constantly switch between being in the quest hub speaking to NPC’s to get your new quest or upgrade your gear and into the actual combat levels, which whilst fun are EXTREMELY short. With the high explosives and huge area damage that some attacks can do some of the levels can be completed in around a minute before sending you back to the quest hub to hand in the quest, which really was quite annoying and it would be much more preferred if you have the option to instantly port to the next zone. After completing a few levels you fight the zone boss, once defeated you unlock the next zone and continue with the story, which presumably at some point will inform you of just what the hell has happened. 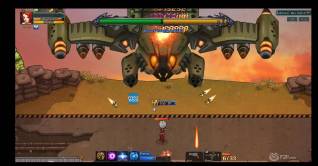 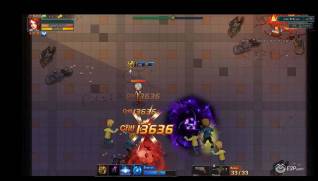 Players are able to buy new gear, upgrade them and equip them with enhancements that will in turn increase your battle ranking, though the full extent of what this means we are unsure. Anyone that is played R2 Games’ previous titles will properly find most of the system is very familiar, players will notice the same daily reward pop-ups, auto routing quests, similar premium cash buys and the typical zone completion “grading” to tell you how well you did. However, the gameplay is completely different to what they have previously released and for us at least is probably their best title to date and is actually a lot of fun without the grind of some of the other games.

The graphics are slightly odd. The zombie characters are extremely cartoony (and in all honesty remind us of Plants vs Zombies), as are the level backgrounds which also worked really well together and add to the humorous flare that the game portrays. The NPC character dialogue popup artwork really don’t seem to suit this same style and looks considerably more manga, whilst the actual human NPC/player sprites have that Chibi look about them, and so the different styles don’t really tie in well together. Similarly with the music, which while very well done and powerful it gives off a different vibe than the humorous tone being set with the constant pizza wisecracks (the first NPCs you meet are all named after cheeses). Whilst not game breaking it does lack a certain cohesion, but is far from the end of the world.