A bit annoying at the beginning

We had the opportunity to try the closed beta of Totem, the new strategy MMO published by ChangYou. In the beta that they provided to us we were able to try the different features of this fun browser game.

When we went into the game we had a character selection screen, which already had a level 30 Tribal Amazon, but we couldn’t create any other choice, but we know that in the game we can create different avatars from different races, like Humans, Orc or Tula'an, but we haven’t seen any difference between them other than aesthetics. Upon entering the game we saw a kind of city with several areas that could be selected, as Barracks, a Castle, a Mystery Shop etc., some menus on the bottom, and some bright icons, it was a little chaotic, but perhaps was due to the character that we had was of a high level. 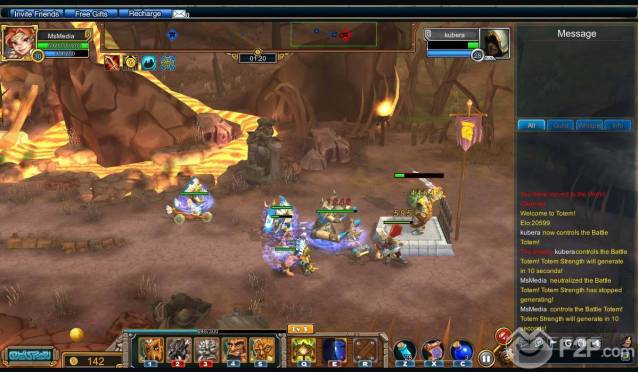 The first thing that we tried to find was a tutorial, which is based on complete quests that will teach you to play. After spending a few minutes learning each menu, we could see that our goal in the game was winning battles using characters cards, which you will get while you advance into the game. These characters cards have different levels of power that will be highlighted in the outer frame of the character, and range from white to gold, depending on their level of power. These characters have different roles, from warriors, archers, sorcerers or support units, each one with unique statistics and abilities, which can also be equipped with items to enhance them.

Another factor that we found is that you can choose spells that can help your units, equip yourself with potions or magical scrolls that give you mana to cast spells, or buff your units.

The game had a feature that I liked a lot, which is that you can merge your units to increase their power, or merge units of the same type to choose the skills that most interest you. You can also build pieces of equipment with ingredients that you are going to get in your adventures, to equip your soldiers.

By clicking on the red button "Play" we entered into a menu to choose a game play mode. We found several game modes, PvE and PvP.

For PvE we found 2 modes, one called Conquest in which you'll face AI enemies with increasing difficulty, and another called Hero Island in which you will participate in different fights as you explore the game world. These PvE modes require the use of "Energy”, if you want to play them, limiting the number of encounters that you can complete. This “Energy” will regenerate during the day or by buying refills at the in game shop.

PvP battles are divided into two options, Matchmaking and Room Mode. The first you get into rapid 1vs1 or 2vs2 PvP fights, against random opponents, in the second you can create a room or join an existing one, where you can choose which players to face.

After studying the options and once we chose our Squad we got in queue to participate in a Matchmaking game. We had to wait a few seconds to play, but we believe that this is because the game is in its beta phase.

When the battle began we were surprised by the graphics that, despite not being impressive, met its objective in addition to being fun and colorful. At the start we had limited gold to buy units that increased while the game progressed. Our warriors advanced through (we have no control over them) to face the soldiers of the opponent, having to choose strategically which units to purchase to join the battle, and when to support them with spells that we have. Once we reached the center of the battlefield, we found ourselves with a new element, a central totem that we could conquer to give us additional gold. We were making progress losing units and buying new, carefully choosing which would be our next step, until we managed to reach the enemy Summoner, and defeat him, something that gave us the victory. We realized that in the beta that Gamefuse provided us, they gave us very powerful characters, so we won the matches easily, but we suppose that in the real game, players will find these battles very entertaining and fun.

In the game there is also the option to create Guilds, to stay in contact with your friends and has several options, which we didn’t try extensively as in the beta we couldn’t find many players. 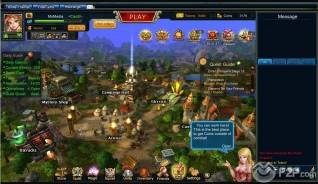 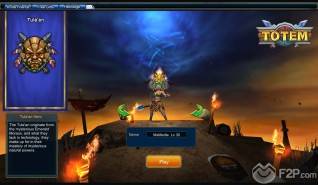 The game is Free-to-play, but has two types of coin, the "Coins", the currency that you can get winning battles and doing missions, and the "Tokens" the payment currency, which let you buy special character cards, costumes or buffs for your units.

Totem is a polished and fun browser game. The fact of not being able to control your units is something that perhaps not all like it, but is an interesting feature. PvE and PvP modes are very entertaining and will keep you busy for hours. If you like these kind of games do not hesitate, you'll like it, so we recommend Totem.