We’ve lately seized the opportunity to check out the open beta version of Topia Island and want to let you know the impressions we gathered about the game:

Topia Island is a casual browser game developed by Bytro Labs. The title combines social elements with aspects from the real-time strategy and city management genre, resulting in an innovative gameplay experience. Players will explore a tropical island on which they will collect resources in order to build houses and set up their own community and economy. Based on HTML-5 technology, this title doesn’t require any download, neither a Flash nor a Java plug-in and can directly be played in your favourite internet browser. 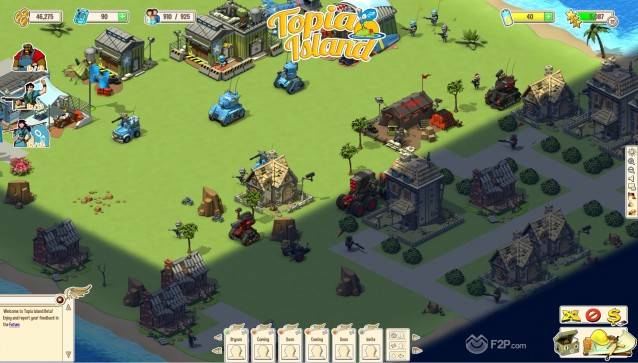 When entering the game world, you’re welcomed by Tammy, a character presenting the storyline and helping to start out your journey by giving quests. Throughout your very first steps and tasks, she’s guiding you explaining the icons and showing where to find what. In our opinion, this is a very nice way to provide players with a tutorial-like feature without annoying them with obvious and therefore perhaps boring tasks in order to familiarise them with the gameplay and its mechanics. Right from the start, you feel quite immersed into the story.

First of all, you’re asked to build residences for your settlers who will show their gratitude by paying rents on a regular basis. And in order to do so, you have to collect some resources, namely wood and stone. Soon, another character introduces herself: Florence, the doctor from the nearby hospital. She encourages the player to build a farm and grow strawberries. Perhaps that wouldn’t have come up to your mind as a prior thing when planning to set up agriculture. At least we would have rather tended to grow other crops to feed the population, but well… After all, it’s just a casual game set in a comic-styled world so you could maybe forgive such things, couldn’t you?

We advanced further, quickly gained experience and reached several levels by erecting more cottages and a school to enlarge the population, growing plants, building a manufactory to produce some goods and set up an economy. We also got to know some other characters involved in the story-telling of the game: Clayton, the mechanic, a rebel named Jack as well as an old lady representing the evil Empire and a smuggler. Time went by quickly while playing as we were constantly presented with new interesting tasks to fulfil which immersed us deeper and deeper into the story of Topia Island.

However, when reaching a certain point in the game, things got stuck a little bit. This was due to the fact that every action you undertake requires energy which, at least to our taste, is insufficiently provided. To harvest your fields, to collect wood or goods produced by your manufactory, to erect buildings and even to collect the rents your citizens are paying – everything you do requires energy and your energy bar is limited and only slowly growing when reaching higher levels. Although this bar is refilled automatically by 1 point every 5 minutes and you’re randomly provided with some bonus energy from time to time when harvesting or collecting materials or rents, we were constantly running out of energy.

Throughout the first levels, the lack of energy was still compensated as you’re always rewarded with a full energy bar for gaining a new level, but the more you’re advancing the harder it grows to gain enough EXP in order to reach the next level. So you have to be very patient when waiting for your energy to fill up again. Or, if you’re of a rather impatient kind and sitting around doing nothing doesn’t count to your strengths, you could consult the in-game shop offering power-ups to recharge your energy supply. Unfortunately these power-ups are only available for Topies, a premium currency that has to be bought with real money. 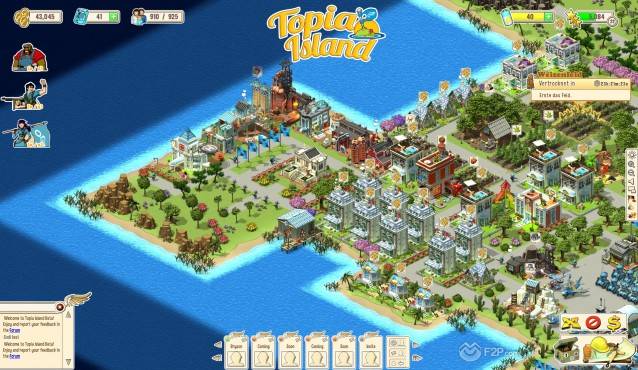 Upon reaching a certain state with a decent population and facilities such as a museum, a chemical laboratory, a coal as well as an iron mine, etc., rebel Jack encouraged us to build structures in order to set up fighting units to join him in combat against the evil Empire. We did as we were asked to and produced civilian infantry units and improvised rocket launchers with some gears and plasters in our training ground as well as a civilian plane and an improvised bomber in our air field. Funny idea to build up your fighting units with plaster, isn’t it? Well, Topia Island doesn’t take itself too serious, aiming primarily at entertaining people in what it succeeds quiet well, we think.

Having produced some troops each equipped with an extra boost for either defensive or offensive ability, we decided to give it a try in combat. And to be honest, we weren’t convinced to even have the slightest chance against the Empire for the opponent troops were far better protected than ours and furthermore, we were unable to equip them with ammo. So with a certain amount of sorrow and curiosity, we looked forward to our first battle.

Combat units in Topia Island are characterised by a certain defence value and offensive force and are divided into three categories, each being strong against units of another category and weak against the third one. Moreover, you can boost their stats by adding one item to each unit. There are such funny things like medals enhancing the accuracy of fire or thermos bottles slightly increasing the defensive value. In higher levels you also have the possibility to craft special ammo. However, as there’s only one slot for every unit, you have to think well before deciding which unit to equip with which kind of boost.

When entering the battle ground, you’re presented to the enemy units and have to place the preset amount of units on the preset location of the map. Having done so and possessing enough energy (5 points are required for every battle), you may start the fight. During the battle, your screen is covered by a colourful graphic full of exclamations like “pow!”, “fight!”, etc. and in the end, you’re provided with a short and simple report showing which side has lost which units and who has won. This might be a purpose-oriented way but quite unexciting as well.

To our great surprise we were able to win the first battle but engaging in the second, we weren’t as successful as that anymore. Although you’re quite restricted regarding the type and amount of units you’re allowed to use (Topia decides if it will be a ground to ground, air to air or air to ground combat) as well as in respect to enhancing your troops’ abilities, we needed several attempts in order to figure out the appropriate tactics to gain the upper hand in battle. We later on realised that it’s also a matter of luck determining the result of the battle and how many units you will loose. In consequence, even if you carefully plan your strategy and tactics, it will always be thrilling to see if all turns out as planned.

Fortunately, your defeated units aren’t completely lost but can be repaired in the hospital using - you may already guess - some plaster, gears and tape. All you need is time and patience as there’s only one hospital able to repair only one unit at a time, requiring one hour per unit. And there’s no queuing function, meaning you have to return to the game in order to collect the repaired unit and to get the next repaired.

As already mentioned above, the game world is designed with nice and comic-styled graphics in decent quality. They can be described as rather being functional than beautiful, however, they’re not ugly at all. There are funny details and animations as well as exaggerated character features underlining their personality. For being developed for an audience of casual gamers, Topia Island consists of not to heavy graphics enabling players to enjoy the game with nearly every system.

Topia Island really is a fun game offering an interesting story and a nice entertainment for casual gamers. It’s perfect for those who like to play for only a limited time per day and don’t expect complex mechanics or a huge amount of customization options. You can also jump in several times a day and pass some fun minutes in-between with this free-to-play browser game. If you’re willing to spend some real money, you are able to advance quicker and to be active for a longer period. Looking for a funny pastime not demanding too much effort? Then you should definitively give it a try – you could end up liking Topia Island!