Supremacy 1914 is a grand strategy browser game developed by Bytro Labs GmbH and set mainly in Europe during the first part of the XX century. You will be the leader of a warring nation and your duty is to dominate the map with cunning strategies and wise diplomacy. The publisher gave us the chance to jump into the game to try it out with an account loaded with Goldmark, the premium currency, in order to experiment the excitement of a complete and well-rounded game experience. Let's see if the game is worth playing. 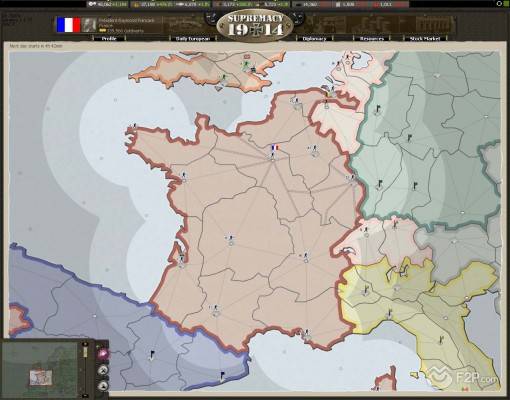 Being a browser game, Supremacy 1914 is extremely accessible. You register your account on the official website, log in and start your games. After you join a match, you can go to the "My games" section in order to have a clear vision of all your open games and their details such as status, ranking, password, anti-cheat, number of players, their names and more. From here you can click on the "Play" button to open each game in a different Java window. Being written in Java, the game offers a lot more of possibilities if compared to other traditional strategy browser-games like OGame or Travian. Once into the real game, on your screen you'll see a zoomable and interactive map updated in real time where players and their dominions are represented by a particular color and a flag, a summary of your resources production, a chat, a mini-map and your menu buttons that will open the following tabs: newspaper, diplomacy, resources, market, strategic view, economic view and espionage view. While resources and market are pretty much self-explanatory, we think that it's worth to spend a word for the others. The newspaper is a virtual daily newspaper and works as a real-time bulletin for every important fact that happens in the game to every nation. You can read about wars, some production aspects, diplomacy between players and more. You are also able to write your personal articles and publish them in the newspaper for every other player to read it. It's a really interesting feature that adds a lot of depth to the gameplay and opens the game to a possibility of roleplaying. The diplomacy tab is where you can check and manage your relations with other countries. You can browse every nation separately, set your status with them (peace, war, embargo, show map, etc.), and read/send messages and check, accept or refuse trades. The strategic view is the main view of the game and where you will spend the majority of your time. In this view, the game will look a lot like a Risiko (the board game) match, as you can see the troops in your provinces (represented by a little soldier icon with a number) and the movements that are happening on the map in real time. In the economic view, you'll have a clear view of the resource production in the whole world. Due to the fact that every province produces a single type of resources, this can be a decisive factor when deciding which province attach first and when. In both views, by clicking on a province you can open the detailed 3D view of that province and check the buildings, build new ones, repair the damaged ones and raise the moral of that province. In the espionage tab, you can hire spies and assign them different mission tasks that range from a quick report of the resources or military productions to real sabotage missions that will drop the production or the moral of a target enemy province.

The game's graphics are very simple but at the same time extremely clear and functional for this kind of game.  The map and the strategic view really remind us of Risiko (and this is a good thing), and the different pictures and icons style in the game is polished and create a nice "WWI style", with nice touches of class like the daily news bulletin which is realized like a replica of a real paper newspaper. Even if the only animations in the game are the troops movements (which are almost invisible due to the extreme slow-paced nature of the game) and the smoke and flames coming out from a damaged province, we think that this choice is almost perfect for a game like this as probably the strategy games fans prefer a simple and clear interface to more complex graphics full of animations that could be confusing.

The game has no sound and while this is not really a big problem and we didn't expect fancy sound effects (as you will probably just the game while doing other stuff), a nice background music would have been appreciated. 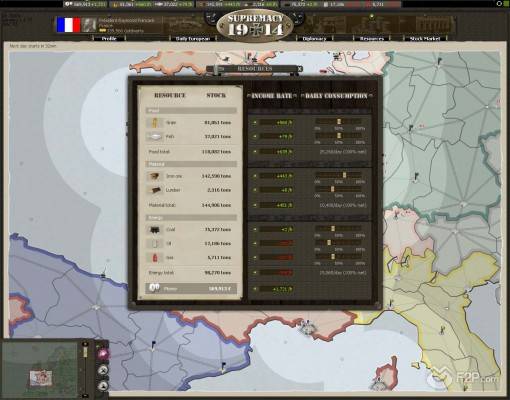 Differently from your usual strategy-management browser game, in Supremacy 1914 you won't have to build every single factory and set-up every single type of production; instead, the game focuses more on the development of the grand strategy and the diplomatic and commercial maneuvers that will make you win the war. You will soon realize that the resources production of your country's provinces isn't enough, and your best bet in order to put your hands on everything you needs and be competitive is to develop a good commercial system and trade with other players. You should also start to study other players' moves and countries and interact with them (and especially with neighboring countries) just from the beginning. One really good thing we noticed while playing the game is that all the social features offered by the game are well exploited by the community. The chat is used by a lot of players, and in the diplomatic window, we received a lot of messages and trading request (often peace or transit requests in exchange of gold marks or other stuff). We think that this is extremely good and one of the strongest point of the game, because it adds an enormous depth to the gameplay and create a whole complex new metagame made of secret agreements, betrayals and delicate diplomacy rarely seen in this kind of games; in Supremacy your capacity to interact with people really matters, and doing it it's extremely entertaining!

The actual strategic gameplay (moving troops, building stuff etc) is extremely slow-paced, and every move usually takes from a bunch of hours to even days to be completed, and a match lasts about  2 months. You can play more than one match at a time, and while the slow-paced nature of the game can be a problem for some people, a lot of players will be happy of being able to log-in for a couple of short breaks at day, make their moves in their open matches and still be competitive against who has a lot of time to invest into the game.

Goldmarks are Supremacy's premium currency, they can be bought with real money and grants a lot of benefits. There are also match that can be joined only if you have a premium account and that have exclusive features like aviation and more. One bad thing about gold marks is that in a regular game you can use them to raise the moral (which is a pretty important statistic) of your provinces and troops, use them as currency in your trades and more. You can understand that this can be a really strong advantage against players who don't use them. 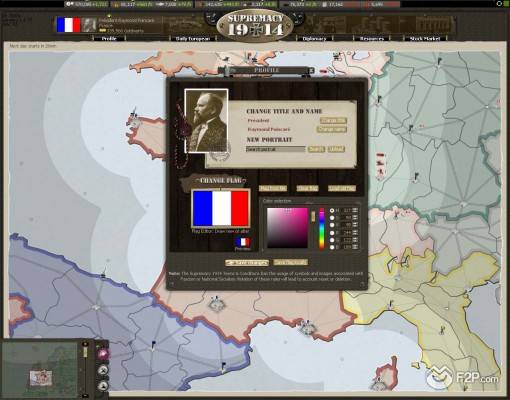 Supremacy 1914 is not a game for everyone. A lot of people could be driven away by the game's slowness , but if you are a grand-strategy games fan and you are looking for a very deep and complex Risiko-style game with a lot of gameplay possibilities and a strong emphasis on the interaction with other players, Supremacy 1914 could be the perfect game for you. In addition, if you like it, you could think about buying some gold marks or a premium account in order to enjoy the game in every aspect.