When you hear the name Gaijin Entertainment, the first thing that comes to your head is probably War Thunder, their extremely popular air action MMO set during WWII; however, the software house developed another quite interesting game - which is in open beta as well - that is strangely flying under the radar of most of MMO players: Star Conflict.

Star conflict is a free-to-play action packed space combat MMO which puts you in the cockpits of your very own spaceships in order to fight an endless space war between three factions, and tries to fill the lack of a good space shooter in the MMO market. Did the guys from Gaijin Entertainment manage to accomplish this difficult task and make all the space combat games fan happy? Or did they fail, like many others before them? Let's find it out together by jumping straight into the game. 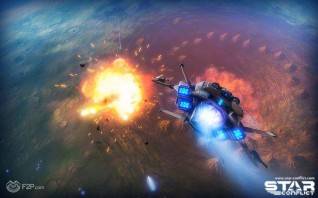 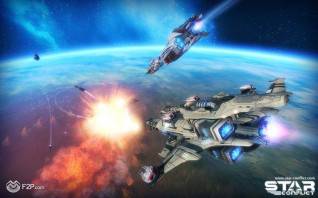 The first impact with the game and the first steps are both smooth and easy; you will be welcomed by an enjoyable CG intro movie and a simple tutorial. The game controls are intuitive enough, so you could actually choose to skip the tutorial missions, but we highly recommend you undertake them as they will also reward you with a nice quantity of credits, the in-game currency. The controls are extremely similar to War Thunder - of course, keeping the whole "we're in space" thing in mind- with WASD you will increase/decrease your speed and move your ship left and right, with Q and E you can rotate it, with spacebar and alt you will move your ship up and down, with shift you will activate your afterburners, and with the mouse you will be able to steer, aim, lock on targets and shoot with your weapons; there are also other keys such as the ship skill and the modules, but we'll talk about them later on. As you can see, you have complete control of your ship, and even if it could take a while to get used to the system and to properly use all the burners of your ship, once you've mastered the system it will be second nature, and you'll be able to pull out some crazy maneuvers among the asteroids scattered around the maps, especially with the lighter and more agile ships.

After the quick tutorial missions, you'll have to choose one of the three available factions, which will define your starting ship and your place in the space war. The available factions are the Empire, the Federation and the Jericho, which incarnate the classic stereotypes of this genre: the totalitarian empire, the rebels, and the outcasts who basically went away a long time ago to mind their own business and that are back with some strange new habits. Choosing a faction won't prevent you from obtaining other faction's ships but, of course, by doing this you can slow down your growth in your own faction tech tree, so it may be a good idea to look on the web for the ships of the various factions and see if you like their design. 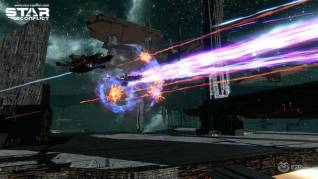 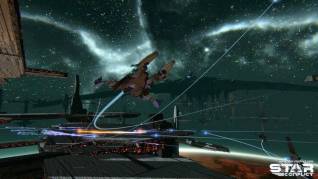 In Star Conflict you can find both PvP and PvE missions; we read that there are different PvP game modes, however, in all our games we ended up playing only in the typical domination mode, where you have to capture some beacon for your team and keep controlling them for as long as possible in order to score points; maybe we were just unlucky. Speaking about PvP, you can access it by the normal PvP queue, and by the custom matches tab. If you choose the first option, you will see the available battles on the space war map, where all the territories are displayed as hexagons with the color of the faction which is controlling them at that time. You can quickly join a new battle and help your faction to win the battle and the sector.

In the custom matches tab you can create a custom game with your rules and with a password if you want, making this section the ideal place for guild training or matches between friends without strangers.

The PvE section offers a bunch of missions, each one with a suggested rank range, where you will team up with other players to fight AI-controlled ships and bosses, and complete particular objectives. We have to say that the PvE offer seems quite limited at the moment, and we can see how, even if enjoyable at the beginning, it could get extremely repetitive to always play the same bunch of missions. However, in a game like this the PvE section is more of a side dish used for example to relax the nerves after an intense PvP battle, so it's not a big deal. 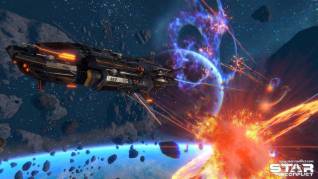 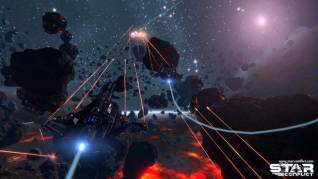 Star Conflict's controls are extremely precise and reactive. The ship responds quickly to the player's solicitations and the weapons behave in a realistic way as well. Each ship feels and plays in a very unique way, and you can actually feel the huge difference between a heavy frigate and a quick and nimble interceptor. Different ship classes have different roles in battle, and it's very interesting to learn how to exploit their strengths and weaknesses in order to use them at their best. Moreover, each ship has its very own set of weapons and its unique skill which will make the experience different even between two ships of the same class.

The matches are quick and fast-paced, the action is addictive, and each game leaves you with that feeling of "just one more" that MOBA players know so well. It's extremely satisfying to avoid a missile coming for you by doing some crazy maneuvers in an asteroid field or finally giving that final blow to an enemy ship after a very intense dogfight which seems to come out directly from an episode of Battlestar Galactica.

In between the battles you can upgrade your ships by spending synergy (basically XP), buy new weapons and parts or upgrade the already owned ones, advance further in your faction tech tree by buying new ships and upgrading them, manage your fleet (you can bring three ships at a time with you during missions) and customize the appearance of your ships. With the exception of the cosmetic customizations (which include a wide selection of stickers and colours) and some premium ships, everything else is obtainable with the regular in-game currency, which is earned at a more than fair rate. However, even the premium ships don't seem overpowered at all, and come with maxed synergy and some convenience bonuses. The other things which are purchasable with real money are the licenses, which give you temporary boosts to synergy and credits gain rates, and other time-savers. Long Story short: the game doesn't seem pay-to-win at all, and the paying players will only have more space to experiment with builds and a faster progression. 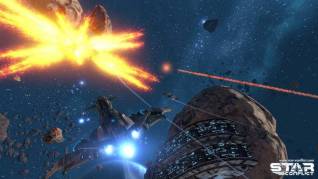 The graphics in Star Conflict are one of the elements that impressed us most. They are extremely polished and sharp, and offer detailed 3D models for ships and enjoyable light and special effects. It's a pleasure to fly around outstandingly realistic abandoned space structures, asteroids and debris and fight next to a big shiny planet. The whole space atmosphere is absolutely amazing.

The ship designs are quite interesting as well, and even if some of them can look a bit uninspired and underwhelming if compared to the others, the whole cast is way more than acceptable. Moreover, each faction has its very own style which characterizes all its ships.

The sounds are very good as well, and you will enjoy every single pew pew and explosion, but we wouldn't have expected anything less from Gaijin Entertainment, after what we've seen, and heard, in War Thunder.

The game features a complete supply of social features, ranging from friend lists, clan support and several ladders for both PvE and PvP where you can see the best players and the best clans around. There are also regular tournaments for all the players where they can compete for glory and prizes. As you can see, the game has the right potential to be launched as an e-Sport, and it will be interesting to see if the devs will be able to push this aspect of their creature. 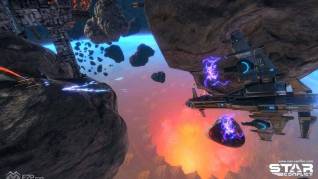 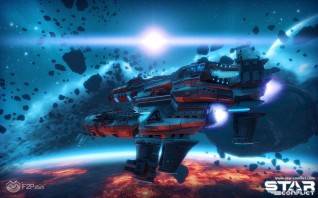 Star Conflict is a hidden gem; with a way more unique setting than the currently trendy vehicles combat MMO games such as War Thunder, World of Warplanes and World of Tanks, it's really a shame that this game is not getting the attention that it deserves, from both players and the press. The technical quality is probably on par with War Thunder, and we really hope that the guys from Gaijin Entertainment will start to push it and advertise it like they are doing with War Thunder, because they have a very good product which right now is probably the best exponent of its genre - space combat MMOs - on the market, especially considering its free-to-play nature.