Wide choice of items to use for your constructions, potential to create your own quests

We took some time out to play the alpha test of MyDream, a voxel based “Minecraft” type building MMO where players can create their own world, harvest resources and construct huge buildings and structures in a completely open sandbox world. The game is being crowd sourced through Kickstarter and has just reached its goal, which shows good promise for the title and its ability to stick around.

Going into the game completely blind and not knowing what to expect we headed straight into the tutorial mode to see what was on offer. Though never really getting into Minecraft that much is pretty have not to make the comparison as the similarities as their from the very beginning. The game is a first person builder creating and destroying the environment with the push of a few buttons on your hotbar and gathering up resources to create weird and wonderful components for building such as wooden blocks, glass windows, wooden doors and a few more obscure items like carrots and signs that you can write your own text on. 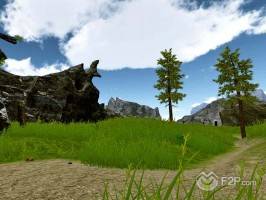 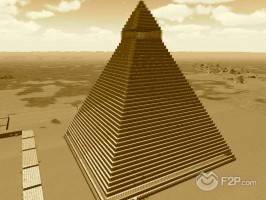 The biggest difference with MyDream is that it is voxel based, so more akin to EverQuest Landmark, where players aren’t confined just by the cuboid constructions that they can make and can actually create spherical shapes either cutting chunks out of the ground to make huge caverns or building up rock, dirt or grass formations in a more natural curved terrain shape instead of layers of cubes. That said, a huge majority of the items that you can build/place are cube blocks so the world’s themselves do still have that Minecraft feel to them.

When we first logged into the game we have the option of jumping straight into creating our own world (either off-line or online), join somebody else’s world play the tutorial mode; having never played before we opted for the tutorial mode. With many convenient signposts placed around the world we were guided through the basics of movement, item selection and block placement. Lead through small prebuilt construction, a castle of sorts, we will brought to an area with open pits filled with spikes that we had to make our way across by building a bridge and stairs leading upwards. One of the convenient items that you can build is a set of steps that fills up one block and can be linked together to quickly create a longer staircase. 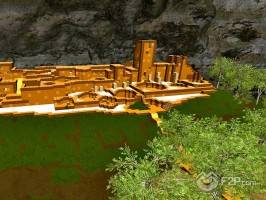 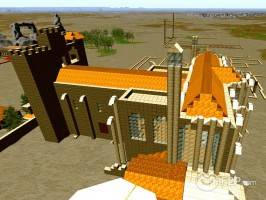 We made our way to the top of the tower where there was a chest that we could open that could be used to store items in, further demonstrating what you could do in the normal game. After a quick exploration of the tutorial world we loaded up our own new off-line world (we tried to create an online world and also try to join someone else’s world but were waiting way too long for this to load up, so were unsure whether it was accessible at the time). In our own world we lacked any guidance on what to do well we had to go, as is the nature of a sandbox game, so we went for a look around the randomly generated world that having created around us.

With little to do we used our super digging tool to blast out a home-made cave in the ground, it literally destroys huge chunks of the Earth free to quickly dig through the ground, hills and mountains if needs be. Creating our own homely cave we then built up a little room consisting of some wooden walls, a glass window and even a door that could open, starting with 100 of each resource/item meant we didn’t have to wait around to actually start building (though this may just be for Alpha testing and not true to the final game). 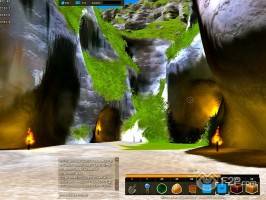 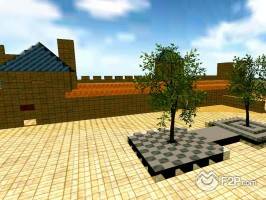 From the trailers we have seen players have the ability to create quests for each other, even giving XP rewards for successful completion, though we didn’t know where to begin with creating one of these we believe it is an interesting feature that almost certainly adds to the game.