This week we took out some time to play Legends of Honor from Goodgame Studios, a free to play browser MMO where we get to build up our own castle, amass a mighty army and then wreak havoc upon our rivals… well.. more like be a minor annoyance to them to be honest. The game is a classic resource gathering, time managing, army building Castle RTS that surprisingly is very similar to the studios’ other MMO Goodgame Empire (and their other Castle building MMO Shadow Kings: Dark Ages)… I guess if you’re onto a good thing then just keep going for it? Whilst all the games have their similarities so to do they have their differences, from the graphics alone Legends of Honor feels like a much more serious MMO, lacking the colourful cartoony style as the other two titles, the artwork and theme feels a little more dark fantasy and truly medieval with one or two Game of Thrones similarities with the three primary factions (Lions, Dragons and… Bears… albeit the sigil actually looks like a Wolf). 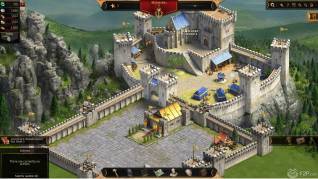 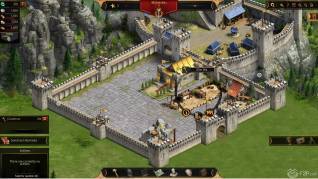 On your Castle screen, looking out over the wonderful vista of your lands, we find ourselves with a mountain to our left and a woody forest to our right; by clicking on the mountain once with our mouse left click we get +1 Stone resource (as a newbie your resources max at 10,000 until you buy additional storage) or +1 Wood for the forest. Given that this is a mouse click…. we’re not entirely convinced you couldn’t just set up a mouse click macro to get all the resources you would ever want/need without any actual effort and certainly no cash.

So once you have resources and buildings it’s time to put together the beginnings of your army; the higher your Honor rank (basically your PVP rank which is increased the more you win fights, and decreases if you lose them/attack low level players) the better quality units you can build; the better you are then the stronger you can become, which really puts you into a higher tier and makes weaker targets less appealing and in fact more detrimental to attack. With a unit unlocked you are able to spend Coin to upgrade them, so any units recruited from then on are of a higher level; similarly with Unit boosts that we could create ourselves, we got to attach these to a group of units that are being led by one of our Heroes. 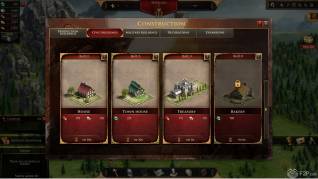 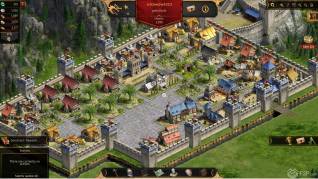 The Heroes feature is actually something we quite liked, Heroes are their own characters with stats, attributes, equipment and are who you assign units and unit boosters to; with them attached to a Hero they can now be used aggressively to roam the world map finding fights! The world map shows everything from AI enemies to player rivals, both their Castles and their own Heroes, by moving Heroes around the map you are able to draw close to a potential target (who only appears on the map once you get close enough) and attack them. The reason we like this so much is that unlike other RTS games of this type usually you have to make your attack from a particular town and garrison armies in it, with Legends of Honor you have mobile armies that can be positioned anywhere around the map. Though you can only attack a target with one Hero at a time, you can have plenty of them as backup ready to make their second attack straight after if you wish, adding a lot more strategy to the game. Battles can be engaged as Assaults or Destruction; an Assault being a single attack, a useful skirmish to soften a target up and grab some resources if successful, however Destruction is an “all or nothing” attack where you continue fighting until your enemy is wiped out or your own forces are!

Whilst the mobile Heroes is something we like, unfortunately a lot of the other content feels a little shallow and incomplete, missing lots of key features that we think a decent RTS really needs. There’s little in the way of community conversation or having any idea of what is happening in the world/server save checking up on the forums or seeing who is at the top of the rankings (unlike other RTS that shows who is making attacks on who, who is joining which Alliance, etc.) and players are arbitrarily encouraged to join any Alliance available without any thought of whether it’s a good Alliance or the right one for them. There aren’t many units to choose from and so the types of strategy are limited somewhat as when you level up the early games units just aren’t as worthwhile to have in comparison to later game ones, reducing your choices even more.

The worst part of the game for us right now is the fact that early game Castle building is just extremely tedious and pointless, the “Quests” you get are simply a long list of “construct building” or “upgrade building to level 2” over and over. The problem is that as they are early game buildings/levels you are able to instantly complete the build, so it has no real impact on the game and yet you find yourself spending an hour just constructing buildings instead of having any fun; it’s not a good introduction into the game. 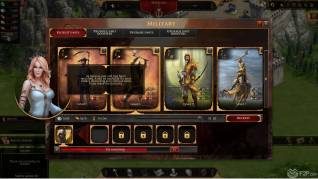 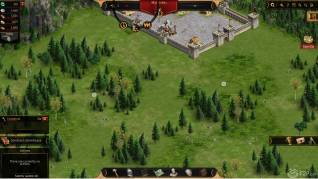