There is no chat, you can't talk directly with your opponent and you can't trade cards with other players.

There are two ways to describe Hearthstone. First, easy-to-learn, difficult-to-master. Secondly, three words are enough: fast, fun and addictive. However of course we will continue since we have been testing the game for days.

One could say that card games (Magic: The Gathering comes to mind as flagship of the genre) are difficult and inaccessible if you have neither the time to understand the infinite number of rules nor the money to buy cards, but Blizzard destroys the myth with Hearthstone. 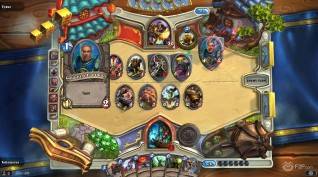 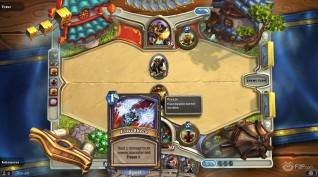 The game mechanics are quite simple: one versus one, 30 health points, a mana-crystals pool which starts small (just 1) and grows with each turn (up to 10) and cards with a mana-crystal cost you have to pay to play the cards, either by summoning minions or using spells. The goal is to reduce to zero the health points of the opponent player. Its simplicity means that a game can easily finish in ten or fifteen minutes, but don’t get us wrong: the game has a great deal of strategic and tactical depth.

There are several types of cards, but it’s possible to categorize them in three big groups: minions, spells and secrets. All minions have two stats: attack and health points, and of course there are minions with special abilities, such as taunt (which forces the enemy minions to attack that creature) or charge (to be able to attack when the creature is summoned, since minions can’t attack when they come into play). The health of minions doesn’t reset at the end of the turn but it’s possible to heal them with different spells. 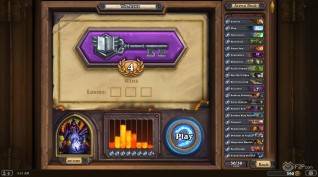 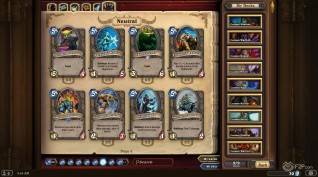 You begin by selecting a hero from nine possible heroes (well-known heroes in the Warcraft Universe as Hearthstone is set in the universe of the Warcraft games series), resembling classes of World of Warcraft: Hunter, Warrior, Paladin, Mage, Priest, Druid, Warlock, Rogue and Shaman; each with their own unique special cards and play style. Each class has its own feel. For example, The Druid deck is all about creatures and enchantments and buffs, while The Mage deck runs with magic damage and crowd control. Decks consist of thirty cards but don’t worry if you are a newcomer because you don’t need to build your deck from the very first minute, you can select a basic deck or build your own custom deck. Decks can be built with neutral cards or class-specific cards, and there are over 300 cards so as you can imagine you have more than enough options.

The UI is beautiful. If you are (or have been) a World of Warcraft player you will fall in love with it. It uses easily recognizable scenarios, like Orgrimmar or Stormwind. Spells and creatures come from the Warcraft Universe so you will be able to notice sound effects and even animations. 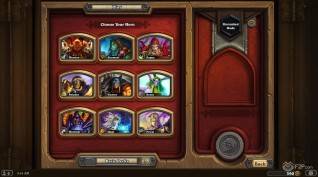 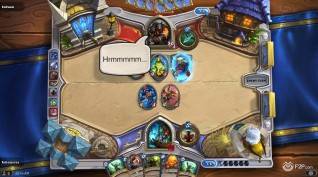 There are three game modes: Ranked, Practice and the Arena. In Practice mode you can play against AI opponents with two difficulty levels –standard and expert–. Ranked mode uses a match making system to match you against opponents with similar skills and it will use a system with different divisions, similar to Starcraft 2 –Hearthstone has so much potential as an e-Sport–. Finally, you have the Arena. The Arena is a very special mode in which you will have to play a sudden death round (with three lives) with a random-cards deck. The further you get the better prizes you obtain. However, to access the Arena you have to pay tokens or real money but in this mode you can get incredible treasures, such as legendary cards.

The free to play business model, remember that Hearthstone is a free to play game, surprised us. There are daily quests (easy to complete as far as we have tested) that will reward you with tokens, 40 tokens for most of them, at least at this beta stage. With these tokens you can buy new packs of cards or get passes to the Arena. A pack of five cards costs 100 tokens (2 packs - $2.99 / 2.69 euro) and the Arena pass costs 150 tokens (or $1.99 / 1.79 euro). Also, you will get five tokens after five victories in the Ranked mode or when you accomplish certain achievements e.g. for playing 100 games you will be rewarded with 300 tokens. Nevertheless, it’s relatively easy to get tokens by playing, so it’s not necessary to spend real money at all.

There is another interesting feature in Hearthstone: Crafting. By disenchanting cards or playing in the Arena, you get Arcane Dust. And you can use this dust to craft cards. We haven’t tested this featured yet but we will come back to it in a future review.

Hearthstone will be initially available for Windows and Mac, and it will be available for iPad too (not at launch though). Nothing has been said about an Android version but it should more than likely arrive too eventually.

In conclusion, Hearthstone is more than a simple free to play collectible card game and definitely is worth trying. Check out our videos and screenshots and enjoy the experience.