Some bugs, a bit repetitive.

Red 5 Studios gave us the opportunity to try the closed beta of its upcoming co-op MMO shooter, Firefall. The game takes you to a future in which a human spacecraft has crashed on Earth in Brazil, releasing strange pulses of energy that have covered part of the planet, which has summoned an alien race known as the Chosen who have appeared to begin their invasion on the Earth. In the game you're a mercenary, hired to fight against the Chosen and pick up a strange ore which appeared after the catastrophe; the Crystite.

The game is essentially a shooter in an open world, with many areas to explore and some RPG touches, which allow you to improve your Nanosuit and equipment, build objects and change your appearance. In addition to the PVE, the game has quite a defined PVP system which is also rather entertaining. 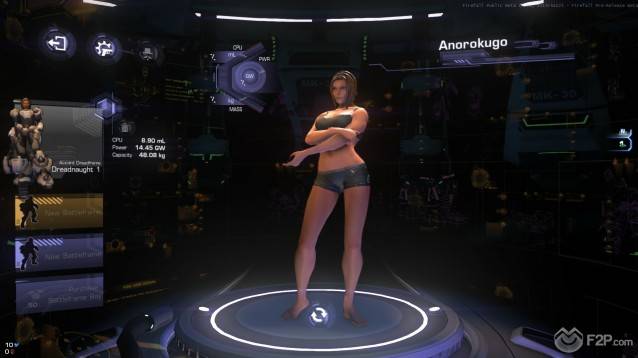 Upon entering the game, we arrived at a character creation screen in which you can choose your battleframe (which determines your class and role); Assault, Biotech, Recon, Engineer or Dreadnaught. You are also able to change your physical appearance, in a fairly limited way, because we had only 2-3 types of face and hair and unable to change any parameter. We chose to be Dreadnaught (a very tough class equipped with big guns), our name and then we entered into the game where we saw a spectacular cinematic that explains what happened in the game and who we are.

After a short introductory video, we disembark from a small ship in Copacabana and we dedicate ourselves to move around. First of all the graphics, although not super detailed, they are functional and in the enormous areas where the game takes place are quite spectacular, although the character graphics can be rather poor (but remember that the game is still in its beta). Then we tried something that is one of the most fun things of the game, the jet packs. The jet packs allow us to "fly" for a few seconds, something that will delight those players who like to explore, because all the world is open and with the jet pack you can get up to the highest summits with some patience. 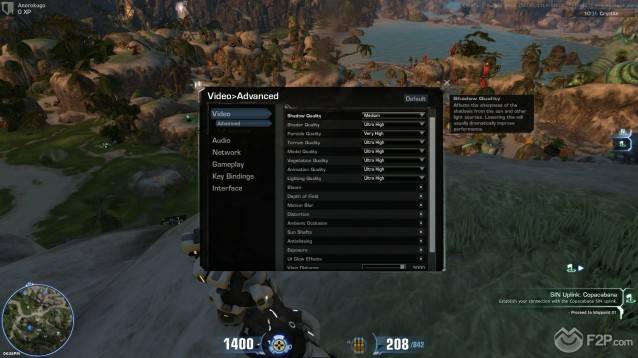 Then I discovered that at any time you can choose to play in first or third person simply by pressing a key, something that gives much play and allows each player to choose the option that he likes most. Our class is armed with 2 guns, a Gatling gun capable of generating mini shields and a combat rifle. After spending a while making leaps with the jet pack and almost dying by falling from a high-altitude (I do not recommend to jump to maximum height, because when the impulse is finished you fall… and that hurts) we decided to advance through the tutorial missions.

The first tutorial missions take you to various consoles explaining to you what makes each one. For example you could see that with few crystals, which you get killing enemies, you can buy any of the other battleframes and replace it when you want; also you can improve your battleframe with some, that give more resistance, speed etc. We can also paint them with different patterns and colors, giving more choice to customization. 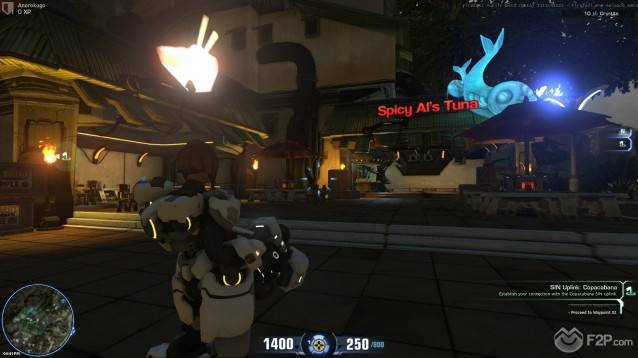 We tried more options and we’ve seen that every battleframe has a very extensive skill tree, which you can unlock as you get experience, because there are NO levels in the game, and with the skill tree you can get enhancements, parts, skills, weapons etc. Each Battleframe has a particular experience counter so you will need to upgrade each one separately.

Shortly after that I discovered two interesting aspects of the game, a console called the "New You" in which you can change your appearance anytime and has a variety of options for faces, hairstyles, hats, or tattoos (you can get many of them paying real money). Another thing that I found was a console that makes objects, with resources and components that you collect in your adventures, ranging from med kits and ammunition to more powerful and useful tools. 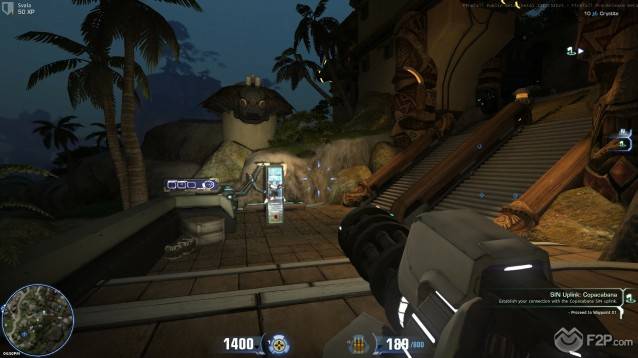 After exploring all consoles, the extensive store of objects in the game’s shop and part of the starting city, I followed with the tutorial that taught me this time to prospect minerals. To do that you have to use a sort of hammer to strike the ground and see if there are minerals nearby. To gather these minerals you can use a kind of extraction tower, which while it is extracting minerals will attract local wildlife, which you will need to kill before they destroy the Tower of extraction. So, the collection of resources is fun... but I don’t know if after twenty extractions you would still find it interesting. 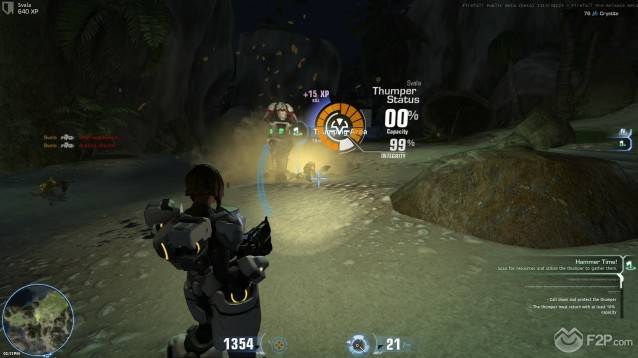 After this mission I decided to explore the huge world full of enemies and missions that are appearing around the map. In this case the first random mission which I found a group of Chosen who were attacking a base. Easy thing I thought... but no, in a few seconds I found myself surrounded and I died really quickly. After a couple of unsuccessful attempts, I formed a group and we set out to eliminate the Chosen. After a short but intense battle, we eliminate the Chosen and its beacon. After completing the mission and receiving the corresponding experience, I saw that the map changes as you complete these type of missions, losing or gaining zones in the process, and there are always areas in danger or to conquer, and going solo is not a good idea. Missions start by themselves depending on what is happening to the world and to the players’ preferences. I completed a couple of recovery missions, and went back to game’s history, which seemed interesting, alien invaders, a mysterious force field... who knows what I find.

The missions that I found were generally: go to a point and rescue somebody, or construct an object and take it to another guy, simple, but this history missions unveil an interesting story. A detail that I really liked was the fact that it was night/day cycle in the game and in the night I had to use a flashlight because it was really dark. 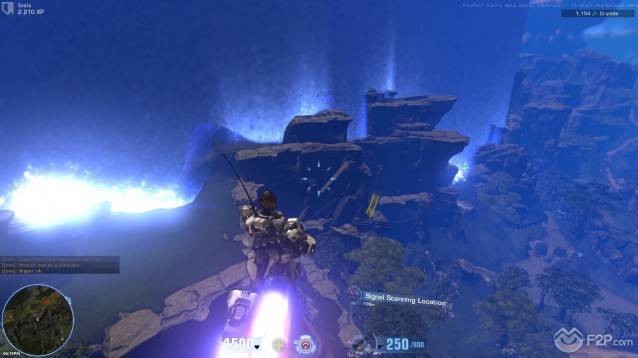 I then decided to try PvP, so I went to the PvP console where I saw that there were 3 options: Team Deathmatch, Sabotage and Harvester, plus the spectator mode, which allow players to watch the replays of the battles.

The first one I tried was the harvester mode in which 2 teams must fight for control of some kind of mining platforms, accumulating points when the teams control the extraction points, pretty funny, and the map was large enough to participate in exciting skirmishes. Then I tried Sabotage mode in which 1 team have to defend a few communication towers and the other team have to hack the towers. Finally I tried the typical team Deathmatch mode where the two teams face each other in a fight where who gets more enemy kill wins. 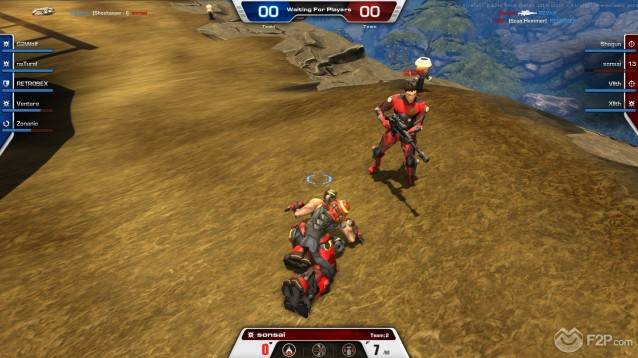 At the end I decided to take look at the replays in the spectator mode; the truth is that the replays are very interesting, and you are able to put yourself in the eyes of each player or move the map to your liking, pause it or speed it up. Very complete.

In conclusion, it has potential to become a great game, enormous, fun to explore, with many things to do that won't leave people indifferent. If it is true that it still has quite a few bugs, and though the graphics aren’t out of this world, the game is quite intense though it can still be somewhat repetitive at times. Saying that, if you like MMORPG’s, shooters and team work it’s worth giving it a try as I’m sure you’ll enjoy it. 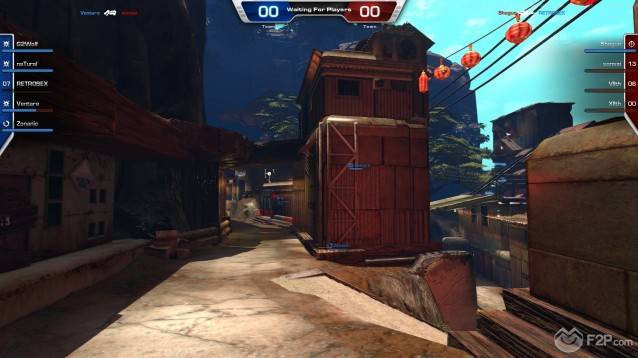