there's no need of players interaction | some animations could be better

Lately we had the chance to try out the PC version of Defiance, the new sci-fi MMOTPS recently published by Trion Worlds that is attracting a considerable amount of excited players, and spend some hours exploring the futuristic and completely new version of the Earth that the game offers. And you know what? We liked it.

But Defiance is not just an online game. The game is part of a bigger project which involve a new TV series (it's at the 4th episode right now) with the same name which shares the same world, some locations and some characters with the MMO and aims to create a massive unique sci-fi universe that keep evolving with both the TV series and the game. Let's see together our impressions regarding the gaming part of this amazing project. 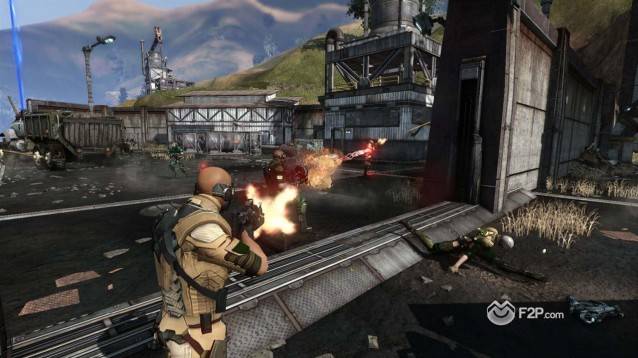 Once you log in and enter the game, a narrated sequence will tell you about the game's story. Without making spoilers we'll just say that at a certain point of the human history aliens tried to colonize the Earth but things didn't go smooth as they thought and after a big war, humans and alien species signed a truce and started living together on a half devastated Earth now full of new species of flora and fauna. After this quick explanation, you'll see short animated and fully voice-acted cut-scene that will introduce you to what's happening and will lead you to the character creation screen. In this cut-scene you can see your character talking with two other Ark Hunters like you, and that are Nolan and Irisa, two of the main characters of the TV show; pretty cool, uh? Too bad they will disappear after this scene... (We've read around that they come back in the game's story later on but we didn't have the chance to advance so far).

The character creation is pretty standard. There are actually just two available races right now: humans and Irathients (but a new upcoming DLC with the Castithan race has been announced). You can then customize the appearance of your character by choosing from a bunch of heads, faces, eyes, tattoos, scars, noses etc. It's not the in-depth character creation of Aion but you can make your pretty unique avatar. You have to choose an Origin for your character too, the available ones are: Outlaw, Machinist, Survivalist and Veteran.

After a short and simple tutorial, you will be free to start your adventure, following the main storyline, picking-up side missions and challenges like time trials, or just exploring the world and participating to the dynamic events happening here and there.

The first thing you'll notice is that, differently from the majority of the TPS-MMORPGs out there, Defiance is actually a lot more of a shooter with just a sprinkle of "RPG". The basic controls are simple and intuitive  and if you've ever played to a TPS, you will feel at home: WASD + mouse to move and aim, left click to shoot, right click to zoom or aim with more accuracy, shift to sprint, alt to roll, c to crouch and g to use your grenades. It's easy and effective. The combat is extremely precise and fast paced and you have to be quick and try to aim to the enemies' weak spot (which, for example, is usually the head for the simple humanoids) in order to kill them quickly.  We have to say that we would have really appreciated a cover system like the one in Ghost Recon Online for example, but , oh well, nobody is perfect.

To move around the map you'll have access to some nasty vehicles like quads, buggies, armored cars and more, and we admit that we really enjoyed travelling and exploring the game's world with our quad, going off-road and performing some crazy jumps! In fact, often, while going to the next point of interest of the storyline, we stopped our vehicle to help some NPCs under attack, clear some hellbugs nests or inspect a suspicious truck, enjoying this events and the shooting and forgetting about the main quest. Sometimes we had this kind of feeling that reminded us of the Grand Theft Auto games, when you are going to pick up the next mission and get totally distracted (in a good sense) by something happening in the world around you. In our opinion this is an incredible positive aspect of the game, because it really manages to immerse you in a living dynamic virtual world. Good job, Trion.

Speaking about missions, besides the main storyline missions-chain, you have different kind things to do scattered around the map: side missions, hotshots, rampages, emergencies, time trial races with vehicles and a vast array of dynamic events randomly happening around the map. The main mission, the side missions and the dynamic events are public, which means that if other players are doing the same kind of event/mission you can cooperate with them without the need of creating a party, and every progress made by one player will be valid for the others in the area playing that mission. While this on one side stimulate the total cooperation between player, and, once again, is a factor that helps to feel to be in a huge living open world filled with other people, on the other hand take away from you the need of communication; for example we never exchanged a word with other players even if we cooperated with them on long missions. 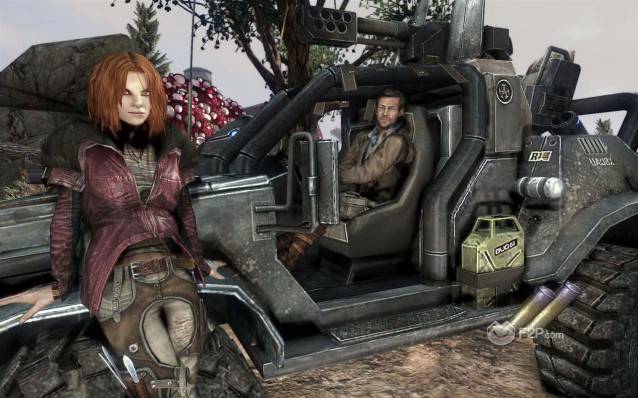 Moreover you have at your disposal the game's instances, called co-op missions, which tells little stories while usually exploring a dungeon full of monster to reach a final boss.

You can also participate to 2 types of PvP matches. The first one is a regular arena team deathmatch, nothing different from any multiplayer TPS, while the other one is the Shadow War, a large scale battle (up to 64v64) set in a huge map where the two teams have to capture and defend particular capture points. Both modes are fun but we really liked the Shadow War as it felt more unique and you can organize different tactics if you have a good group of friends to play with. Winning matches you can also unlock special PvP outfits.

As we already said before, Defiance is mainly a shooter than a RPG, and remaining loyal to this, Trion made the brave and excellent choice to design the game to be extremely skill-based; This means that, even if there is a form of character progression through skills and gear, is something totally secondary, and a player which played 1 hour will be almost on the same field of a player who played for a month. Long story short, if you are good at aiming, shooting and dodging, you can easily beat a veteran player in PvP.

The main way of progression is through the EGO system. By killing monster and completing missions and events you'll get experience increasing your EGO rating and gaining EGO points. The EGO rating will unlock different kind of content, like inventory slots, co-op missions (the instances), perk slots and more, while the EGO point can be spent to buy new skills and unlock new perks or improve the already owned ones.

To kill your enemies you'll have a HUGE selection of different weapons, divided in several categories. However, weapons in the same category and even of the same type can have totally different stats and so they need to be used in different ways (for example the same type of assault rifle can be found with a full auto mode or with a 3-shots burst semi-auto mode, more accurate and with a recoil easier to handle). Weapons come in different rarity and can have random bonuses. Moreover, each weapon has an experience bar that when it's full will unlock an additional bonus. However, progressing through the game you won't find more powerful weapons, but just different ones (or at least, even with a good bonus, the difference is not that strong), so the game it's not about find the strongest weapon, but the one that best fit your playstyle.

The role of the armor in this game is played by the energy shield. Just like with the weapons, there are different types of shields with different rarities, stats (shield power, regeneration rate, regeneration percentage) and bonuses.

Regarding the appearance of your character, it will change thanks to the outfits and the headgear. You can buy them from particular vendors, collect them by completing certain missions, or in alternative you can buy some special ones from the cash-shop. They are just cosmetics. 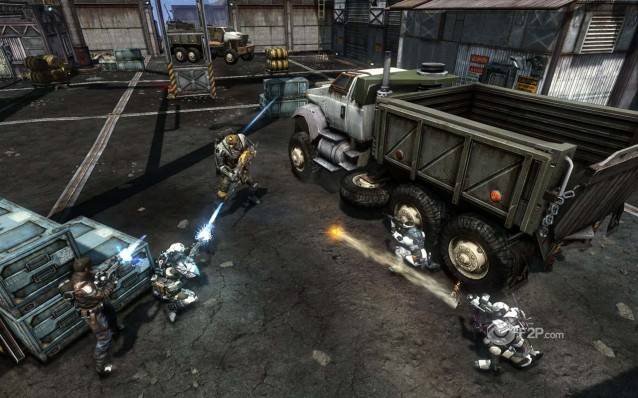 The game features light and polite graphics. The characters 3D models are nice and detailed, and the weapons models are interesting and unique. Even if the game's world it's not so big, it's beautiful and rich of content and well-made buildings or location to explore and discover, and you can have fun even just driving around enjoying the natural landscape filled with lake and strange alien vegetation. Animations are realistic and well-made, and the cut-scenes are almost always enjoyable, even if sometimes the 3D-actors feel bit too inexpressive. We have to say that sometime we had the feeling of some animations "missing", like when falling down a high place, you would expect some kind of "parkour" roll like in Warframe, but in Defiance your character lands standing still, in a very ugly and unnatural way. Off-course it's not a gamebreaker, but would have been so hard to add a little roll-animation to make everything more realistic?

Defiance is a very good title. The most strong points for us are two: it's absolutely fun to play (if you like shooters, off-course), and it's fair. You don't have to worry about your character progression or to keep up with other players to be competitive in PvP; you just need to learn to play and enjoy the game by playing for 10 minutes or for hours. The main storyline features nice characters and it's interesting to follow, even if sometimes it feels a bit uninspired. However, the world is rich of other content and you will always find something to do. It actually feels like playing a story-driven single-player open-world adventure but with other players around, co-op missions and PvP. And if you like this kind of stuff, it's amazing. Maybe it could result a little repetitive on the long run, but developers promised they'll regularly release DLCs to keep players interested with new fresh content.