Everything else to do with the game

We took a little time out of our busy schedule to try a more extensive play through of Chaos (you should definitely check out our first look video) from Joybit, a free to play browser-based fantasy themed RPG. The game was originally developed for the Asian market as is pretty apparent by the mechanics, features and busty toons at every turn (literally one of the loading frames that always pops up is of this busty mage with a staff entrenched between her firm and ample bosom). As ever with these types of RPG’s we’re gone be up front and say they’re honestly not our thing, there’s usually no skill to them but as ever we try to be open-minded and judge each one on its own individual merits instead of tarring them all with the same brush due to previous bad experiences.

So straight away we’ll say that the graphics are actually pretty decent, they have that Path of Exile meets Torchlight type of quality; really well designed models (although slightly jagged around the edges in places) and environments and the GUI is pretty slick. As mentioned the constant stream of busty women, whilst terribly overdone, are also illustrated extremely well. The sound, however, whilst being a good quality has pretty much a single track on loop all the time that is now embedded in our brain as it is extremely catchy and reminds us of a song that we can’t quite put our finger on.

That’s probably the best we’ve got to say about the game, the rest is going to be going through the features and telling you just exactly why we didn’t like them. 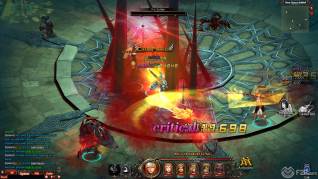 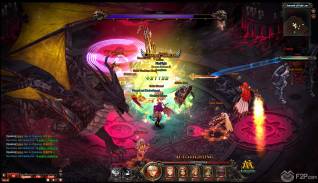 Starting out was logging into the game, or at least trying to using our old account when we did a first look of Chaos a little while back, after multiple attempts and logging in it was clear we couldn’t remember our password, unfortunately hitting the password recovery sent us to an expired forum page that said we needed to log in with our account to access it. Brilliant. Instead we made a new character, choosing from the only two available classes; a Paladin and a Warrior… you couldn’t have two classes that were so similar; both melee with elements of magic, one was just squishier than the other. The name generator is laughable, putting together some really unheroic names using normal Western names and words (“PrunellaBerkley” was our favourite from last time).

Logging in; it runs terribly. So often mobs appear and are fighting you before their character model has even finished loading, so either a weird silhouette figure like an MSN character icon or an invisible creature with a glow around it. Not that it matters, you don’t need to be able to see your enemies because straightaway the game goes into auto combat, it kills enemies, runs to the NPC you need to speak to and, providing you don’t hit enter first, will skip through the dialogue after 10 seconds, then run to your next mission. The amount of AFK is ridiculous and halfway through the game we were actually playing it on our second smaller monitor whilst doing other things and just hitting enter every so often when it came to a point it wouldn’t skip past. This was actually more annoying than having an AFK system at all, having one that isn’t actually fully AFK so makes you sit there watching the game even though you’re not playing it just because it will hit a menu every so often that you have to manually skip through.

Playing on our second monitor was a laughable experience, as ever these games are filled with that many icons and pop-ups trying to get you to recharge, click dailies, login rewards and every other flashing icon with bells and whistles dominating your screens retail space. On our secondary 1024 x 768 monitor we had about a 300x300px area that wasn’t overrun with icons and there were actually some key menu icons that we couldn’t even see when playing on our smaller monitor and there were no settings to change the resolution.

The actual story arc is an odd fusion of every Western mythology and religion available, combining the Angel Gabriel, Thor and Hercules with a variety of other deities and higher powers fighting against the ultimate bad guy/gal Lilith. The game revolves around God disappearing and the “Asmodeans” appearing from the bowels of hell to destroy the humans; a theme we’ve seen so many times it’s becoming its own meme. Insult added to injury is the pretty bad localisation into English, though we have seen far worse so I guess that’s a positive? 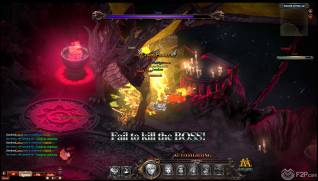 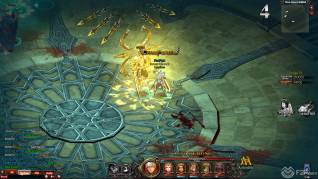 The “gameplay” is touted as being an action RPG, well you don’t have anything more than two abilities any one time, with what appears to be a maximum of five abilities to choose from in the entire game even at max level. Instead players must recruit heroes through an arduous coin grabbing mining system where you can mine ore to get gems and then purchase new Heroes who you can be put into your party and will fight alongside you. Players collect gear, mounts, heroes, skills and then upgrade them; pretty much everything can be upgraded to the same level as your character and no higher and, of course, upgrading costs silver.

Playing in a semi AFK mode like the game seemed to want us to we didn’t pay that much attention to upgrading anything, we flew through all 10 solo campaign levels in Chapter 1 without even breaking a sweat, up to this point (around level 25) we barely even needed to look to the game as it walked us through it, then we suddenly hit a wall. Starting with the tenth level in Chapter 1 we faced “Moses” the Fireimp (yeh…), or more accurately a firebreathing dragon who absolutely battered both myself and my companion. Switching to one of the other features, the Space Battle, which is a horde mode Tower feature where you try to progress of the different levels, so too did we get absolutely stomped on. Okay, so maybe we need to upgrade? No problem we have plenty of silver. As you have to upgrade each of your six pieces of equipment individually and we hadn’t upgraded them since around level three then notably we were a little underpowered for the battles (all of a sudden…), unfortunately as we started spending silver like it was going out of fashion we suddenly hit a pleasant little feature of a cool down timer, which wouldn’t allow us to upgrade our gear anymore and would have to wait 10 minutes for the cool down timer to reset or pay gold (premium purchasable currency) to do it straight away.

So instead we decided to try and upgrade some other stuff, again hitting the same cooldown issues until we went to the Arena PVP to see if we could improve ourselves that way. As we hadn’t done much of the PVP at this stage we were a low ranked and so could only fight players of a similar rank, which meant smashing level 1 characters with our level 25… until we hit another cooldown. The PVP is pretty pointless and we automated that combat as well, it’s hard to see how it’s going to be an action RPG with PVP when all you have is two abilities to cast where given that the individual customisation of the two very similar classes is so non-existent that it is always going to be a case of whoever is the higher level and has all their gear and skills upgraded already is going to dominate.

Essentially the game is just not that good, the same repetitive automated combat that even if you chose to take it out of automated combat it isn’t particularly fun anyway because you have no skills and all you can do is simply click the enemies over and over to attack them.