NOTE: Continue from the first part of our exclusive Marvel Heroes press coverage.

Preparing for our next outing gave us the chance to check out the vendor features, selling off our gear that wasn’t good enough to use (which was pretty much all of it as we’d already been kitted out with good gear) and buying some healing supplies. As well as selling your items for money to buy other items mini buffs from the vendor, you can also give the vendor your unwanted items, which he will convert into XP for himself and subsequently level up; the better quality an item you give the vendor the more XP he will gain for himself. Each vendor will show how much an item is worth in currency and how much it is worth in XP, improving a vendor in this way only improves them for you personally, but in doing so the vendor will give you a wider selection and more powerful items to buy the higher his level.

A quick portal back and we were in the subway once more, much to my chagrin that as a God I had to take the subway like a common mortal, but needs must. While fighting more mobs I asked the guys whether there was any benefit to attacking an enemy from behind and whilst there is no higher crit chance etc. associated with a rear attack your position and direction is always important. May mobs and heroes will have forward facing shields, so attacking from behind will yield a greater advantage than simply try to smash through some tough forward defences. Whilst fighting I managed to level up and put a point into Flight, the talents system being your typical talent tree where certain talents are locked without pre-requisite a talent or level. Flight, as well as other skills such as tumble, are pretty much escape talents to quickly get away when swarmed by mobs (which happens a lot and often I found myself blocked in by a number of angry henchmen).

We fought our way through the subway and came up at the Upper East Side to a police station and our objective location. We headed up to the roof (again, not only was I God but now a flying God no less I still had to take the elevator like a puny mortal) to face off with Bullseye, the boss fight for this quest. This was a much better and considerably tougher fight, lots more health to beat down and he did a mean near one-shot ranged attack where suddenly a red target would appear on your screen with “Take Cover!” and the target slowly got smaller showing how long you had before the shot was fired, in that time you have to break line of sight with Bullseye to stop the attack. One or two times our party members were caught out and we had a few bodies hit the floor, but every cloud has a silver lining and we were able to experience the death system.

Once your character goes down you have the option of respawning at a waypoint, which happens automatically after two and a half minutes, or you can wait for someone to resurrect you and bring you back into the action. One of the joys of the combat system is that any hero can bring you back with the not-always-so-simple action of right clicking them and running down a ten second timer where in that time you can’t move and any damage taken resets the timer; resurrecting people whilst you are still in the middle of combat with multiple mobs is practically impossible.

A little more fighting and some pretty good teamwork we dropped Bullseye and had to speak to our quest NPC, which cut to another motion comic explaining and advancing the questline. All the characters are fully voiced and the comic illustrations are pretty good, though we were told that there’s still work to be done on them and extra polish for the final release. 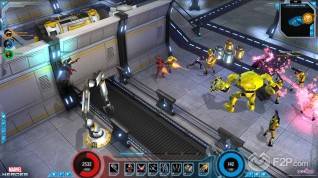 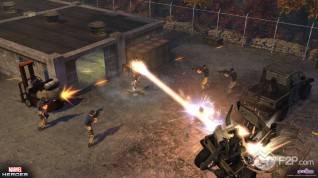 After the action comic we were given our next quest from the NPC… to find and defeat one of Marvel’s most notorious villains; the Kingpin.