We met up with the guys at Yager Development at Gamescom this year to check out their space armada shooter Dreadnought, having seen a few videos of the game previously we were pretty hyped to check it out in person. For our meeting we were given a brief presentation and overview of the game and then got to play the two currently available game modes Team Deathmatch and Elimination.

The game itself is a space shooter in every traditional sense, however not all the battles take place in space; some are in low orbit over alien planets, and the ships you fly are absolutely huge, though not necessarily lacking in mobility. Whilst it’s fair to say the ships, in general, lack the break neck speed of traditional fighter pilot style shooters, instead what we were met with was slower, methodical and much more strategic epic battles that felt like climactic scenes from Star Trek or Battlestar Galactica. Getting in and out of battle isn’t always easy, so positioning, timing and teamwork are vital to make sure you don’t find yourself the sudden victim of an ambush as a well hidden ship that no one has vision on can easily sneak up and unleash a broadside bombardment and leave you nothing more than a burning hulk of metal.

Mechanics wise the game has 5 primary classes that follow the traditional tanky, healer, support, dps, scout style classes, with each having 3 sub-classes for some further specialization. That’s not all though, each ship is able to customize its loadouts/abilities prior to going into battle with 4 abiltiies in play and 4 different choices for each, creating a decent sized 256 possible options PER SHIP, and there are over a dozen ships available. Not only do abilities change the skills you have in game, but they can also potentially change the look of your ship depending on the physical design of the new component, combined with cosmetic structural changes, paint jobs, camo and decals players really get the chance to make their ships unique and will be the main monetization focus for the game when it launches as free to play.

For our try out we first jumped into a Team Deathmatch with one of the bigger dreadnought ships, slow and steady but packing some immense firepower with our missiles, broadside attack and a charged up warp jump to get us in and out of battle quickly. The controls are fairly simple with WASD movement, space bar to make your ship descend and shift to make it ascend, giving full 360 movement. Shift and space bar may have been the other way round, we did keep confusing them in the battle as well and constantly slammed into structures; fortunately right now there’s no collision for the big armada ships and it simply pops a shield and pushes you away slightly. 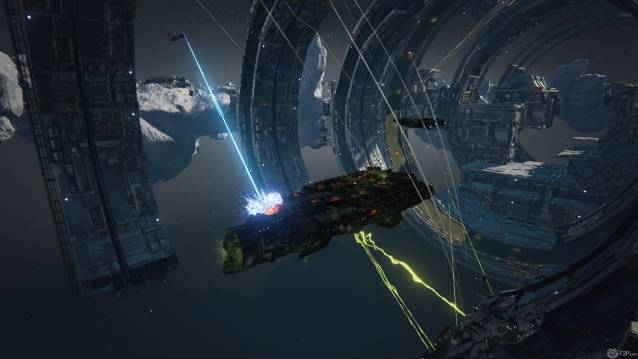 Aiming is done with the mouse from a behind the ship third person perspective with the middle mouse button opening up a reticule where you can quickly choose to push energy into your attack power, shields or engine speed; balancing these three quickly is paramount to survival. Working in a team of five with another press guy and 3 developers we were up against another team of five, the map we were on had a lush rocky vista where we could slowly creep beneath canyons and then try to pop up last moment to catch the enemy unaware. Team work is vital, as a tankier class we were generally up front trying to take more of the hits while the other ships harassed, but working together with some support ships enhancing your attacks when they target the same enemy ship with a huge laser beam meant we were blowing ships up left right and centre; albeit we didn’t last all that long to be honest and once we were destroyed we were out of the battle until the game was over.

The second game was Elimination, which worked similarly to Team Deathmatch in that it is the first team to destroy all the enemy flag ships, however, when your ship is destroyed you respawn in a small, faster ship that doesn’t quite have the same damage output, but still has the same skills your chose for your flagship. Die again and you stay in the same ship, only a little weaker, a third death puts you into the smallest fighter that are really fast, and hard to target when they’re on you, but if you get a shot on them then they can be taken out easy enough but can be pretty deadly when they come in a swarm. 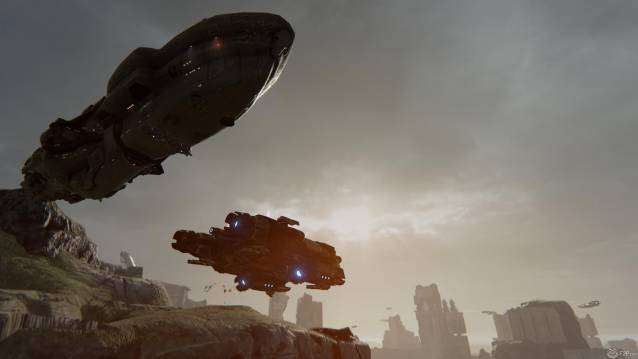 Elimination is the best of three rounds and this time we decided to try out a Scout ship, with some homing missiles and a “Blink” ability the ship could quickly disappear and jump forward through space time, appearing a little distance away, great for blinking through the huge space station we were fighting around. Alternatively, combined with our third ability which was some maneuver whose name we cant remember, when hitting it we could do a pretty quick 180 to be facing the other way; given the slow movement of ships it takes a while to turn around, so combined with our blink we were able to pull out in front of ships, blinks behind them, then hit our maneuver to 180 and attack them from behind. First time round we didn’t do too bad, but we definitely got the chance to experience playing the weakest fighter ship.. these things fly fast and unfortunately my spawn point (which I later found out you can move) was right in front of an asteroid so I would keep coming out at a fast speed and occasionally running straight into it and blowing up (flag ships don’t have collision damage but fighters sure do). 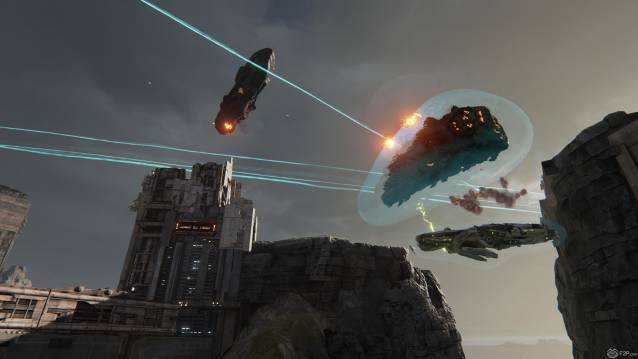 For our second game it came down to me as our remaining flag ship, still in my Scout, versus a developer in a similar ship, however my expert flying skills combined with my skill choices really allowed me to keep harassing them when it came to the final one on one, with us duking between structures and trying to outmaneuver each other. Ultimately I was the victor and with the final explosion I heard the cheers and congratulations over teamspeak from my other team mates, it was pretty awesome.

The game is still mostly internal testing and Alpha will be soon with Closed Beta testing coming early 2016, which players can now sign up for. Primarily for PC the game will be compatible with keyboard and mouse as well as Joypad, though given the lack of fighter focused gameplay they won’t be looking to implement joystick controls and any internal voice system is still up for debate. Definitely worth checking out, the Elimination game was great fun, and with the wide spectrum of ships and abilities it’s definitely a game to sign up for. 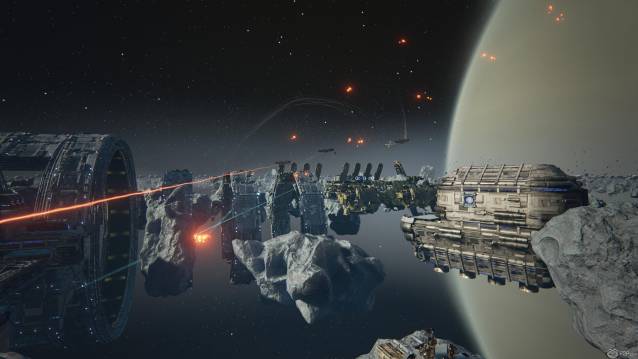 Very soon we also publish a profile, so stay tuned.