At GamesCom this year we got the opportunity to experience first-hand the new third person vehicle shooter Crossout from Gaijin Entertainment (War Thunder) and developed by Targem (Star Conflict), a post-apocalyptic MMO where players are able to build their own crazy weaponized vehicles then go head to head in some deadly head to head combat. For our experience we were put alongside a few press guys to play on the internal servers against folks in a different area, but prior to that we were given a presentation and a general overview of what we could expect in the game.

Essentially the game is like many fast paced vehicle combat MMOs, but with the Gaijin level of detail when it comes to customization and damage, taking a page out of War Thunders book there are some extremely detailed damage points with the various vehicle components that really give a more realistic experience. Players get a wide variety of options to customize their vehicles, starting with the chassis which will determine a variety of things such as the general look and overall location of hardpoints where players can affix armor, wheels, engines and of course weapons.

Given the post-apocalyptic setting the weapons range from huge whirling circular saws, shotguns, machine-guns, rocket launchers and futuristic plasma weapons, ending up with some scrap yard from hell concoction that looks like Warhammer 40k and Mad Max had babies. Players aren’t restricted to a certain type of weapon and can have multiple; dual chainsaws sticking out of the side of your chassis to inflict some devastating melee damage combined with some long range artillery mounted on top. 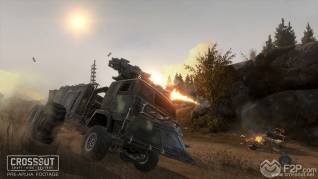 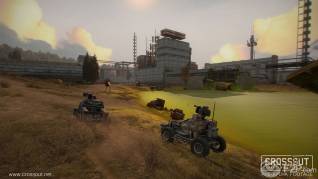 As the chassis can only hold a certain amount of weight players must be conscious about balancing their weapons and armor, if you want to literally make a tank then it’s possible, but you will greatly sacrifice mobility and speed; that said if you don’t have armor protecting your vitals then mobility won’t mean much if you’ve been destroyed. The damage locations mean players must try to consciously protect key places, including wheels; lose your wheels and you may find yourself a sitting duck… alternatively you can throw a dozen wheels on your big-rig style car so you can afford a flat tire or two. Destruction of the chassis, or the internal driving cab component, results in the destruction of your vehicle and being removed from the game.

Before you even step out into battle we were given the chance to test drive our creation (a chain gun wielding monstrosity floating on jet thrusters), allowing us to drive around in an open instanced area, trying to jump different ramps to see our vehicles traction and speed, as well as shooting at a parked up version of our vehicle to find any weak points; after that we were ready to fight. What game modes are available we’re currently unsure, but we got to play a team deathmatch as expected, though we’d expect to see some classic capture flag and elimination style games as well; the game does however have a variety of maps available including some hazardous environmental aspects such as toxic pools of acid. 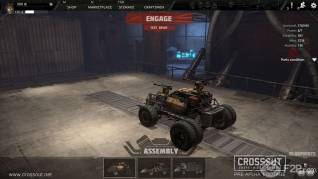 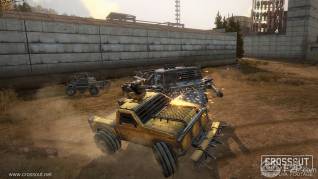 The vehicles themselves handle completely differently from each other in our experience, able to switch between a few pre-made vehicles between games we tried a few out and it will definitely open up options for players that like a particular style of play. With an overhead mini-map we rallied around the desolate industrial complex we found ourselves in, trying to stick with our team as best we could, but choosing a slow and steady vehicle with immense firepower it meant we were arriving to some of the battles at the back end and just finishing people off (which was great fun).

Progression looks fairly standard and players will be able to level up their account to gain access to new weapons, components, decoration and such, and actually trade with other players, but the games is most definitely going to be free to play and we expect will follow a very similar monetization aspect as War Thunder. No word on beta phases yet but keep checking out the site and we’ll let you know straight away!