The fourth edition of Survarium's Dev Diary reveals information about the Freeplay mode, a separate game mode that takes place in a map much bigger than the regular PvP maps where players will be able to perform tasks for different factions, participate in random events and explore in search of valuable items.

This mode combines PvE, PvP, RPG elements and survival. It gives the player the opportunity to develop his or her character, gaining experience, reputation and money for completing tasks and performing other actions. Across the map players can find items that will give them money, experience, and reputation but only if the player is able to leave the map carrying them. If killed all items carried by a player are dropped and can be picked up by another player.

It features several large structures, which differ according to the risk and difficulty of gameplay. The most dangerous areas will be available only to players with the best gear and access to some areas will require playing through the story quest chain.

Approximately every two hours of real-time, a storm will occur. This key element will offer the possibility to find very valuable items. About 15 minutes before the start of the Storm, players receive a warning and the game world will stop allowing new players to join. In the allotted time, the remaining players must find shelter or leave the area, otherwise they will perish. After the storm has passed there will be a number of very valuable items scattered around the area. Survivors of the storm get a 10 minute head start to search for these prizes after which some of the prizes are destroyed and the location accepts newly connecting players. 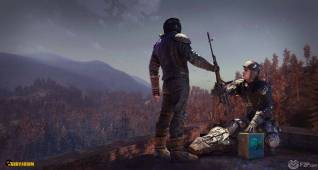 In Freeplay mode, there are neither allies nor enemies. The relationship between players solely depends on the players themselves. Often players will get a competing task. For example: one player will have the quest to protect a camp and the other to destroy the camp. There are three different types of quests:

- Story quests are given to the players in the lobby. They are associated with advancing the plot and can only be done in Freeplay mode. Story quests allow multiple solutions and are added to the game as the story progresses with updates.

- Secondary quests are issued on behalf of a faction, with which the player cooperates. This quest is issued at the entrance to the location and usually indicates some side goal or solution to the current story quest.

- And finally, random quests. Player receives this type of quest during the game directly while playing.

In addition, each player in Freeplay mode will have "karma", which will be visible to other players and will be saved between game sessions. By helping other and behave properly, karma grows. On the other hand, killing players will make karma to fall. It could even put a bounty on a player's head.

We are eager to test this mode. Stay tuned if you want to know more.