We got the chance to sit in with Behavior Interactive, the team behind Warhammer 40k: Eternal Crusade (W40KEC) to get a short insight into how the game was developing and what we could find out about the title.

For those unaware, W40KEC is the IP from Games Workshop that brings fantasy into space set in a dark and gritty universe where Orks battle against the deadly Space Marines, Eldar and other factions that battle in and endless war among the stars. Initially it will run a buy-to-play payment model (similar to Guild Wars 2’s) but you never know, so here we are.

The game is a PvP centric game, promising such exciting features as vehicular combat, friendly-fire, base attacks and more. One of the key things that the developers pushed was that they continue to work with the fans and other developers to ensure that they are making a great game.

As far as the meet with the developers went there wasn’t in fact that much information on show, not hands on testing or live gameplay, but an interesting short trailer to bring to life the emotion and atmosphere the team are hoping to invoke in the players, the first of five trailers that will be released over the year (the first one coming soon!). 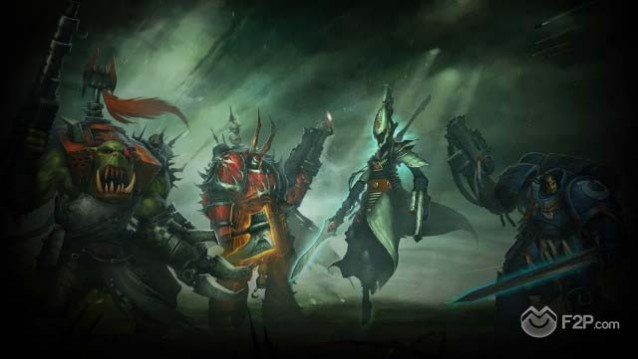 The folks at Behavior Interactive went at lengths talking about what the game would be like, and for now I guess we can but take their word, talking about huge continents that would take an in game hour to run across in a straight line (if it were possible, which it isn’t) and the twitch based combat that would involve “thousands” of players in a battle.

One of the more interesting aspects of the game and we liked the sound of was the way in game command structure and communication was being encouraged the creation of Squad Commanders who would lead 10 players in their squad, hooked up with in game voice chat and the Squad Commanders themselves falling under the higher authority of a Strike Force Commander, who in turn would have 10 Squad Commanders they gave orders to. The game will be the first to integrate Razer communication software, normally used as a standalone program the software will work inside W40KEC, will still be accessible outside of the game where Guild members can see if their friends have logged on to their Razer communications and try to get them to log into game.

The team spoke more about their Founder Program, citing their expectations and goals with what they wish to achieve. The Founder Program will cost $40, the game itself is a buy to play game anyway, which will give early access to the game as well as 40,000 points to spend in the in game store (equating to $40) for players to buy gear that they would like instead of providing some stock early access founder items that people might not care about. Furthermore all the factions will be unlocked for Founders and they will have four characters each to try out each faction, although the Ork faction will remain as being free to play regardless. Players will have the option to switch between factions, deleting their character and reclaiming all their spend points, prior to release where they will need to lock down their primary faction choice.

The new website is looking to be launched in the coming weeks with all the information on the factions, some added media and information and access to purchasing the founders pack, so keep your eyes peeled.