Beyond LoL and Dota 2: Alternative MOBAs

The MOBA universe is one of the biggest growing genres in the free to play MMO market. With the huge player-base and financial success of games such as DOTA 2 and League of Legends it’s hardly a surprise that many developers look to try an emulate them and carve out their own piece of the industry. For the most part many MOBA are very similar in their mechanics and gameplay; typically seeing two teams of five going head to head on a single map the core objective is to destroy a structure at the enemies’ base positioned at opposite ends of the map. From here the details vary and include, exclude and modify various aspects such as using “lanes”, direct routes between the two bases that AI “minion” waves spawn and head down constantly trying to push into the base whilst the player Heroes/Champions/Commanders do their best to fight them off as well as fighting other players in exciting PVP.

For a long time DOTA 2 and League of Legends were the primary leaders of the MOBA genre, LoL being the most popular in terms of players, but both offering a free to play model that focuses on players purchasing new hero characters, each of which having their own unique abilities and fulfil different roles (tank, healer, dps, etc.), either with earned in game currency or with real world cash. For the inexperienced the differences between DOTA2 and LoL are slight, and the devil is in the details with them, coming down to how players acquire and spend gold, different terrain features, how they upgrade items, the pace and frequency of battles; for those outside the genre the games are very similar but are generally seen as quite “hardcore” in comparison to a lot of MOBA that have followed. 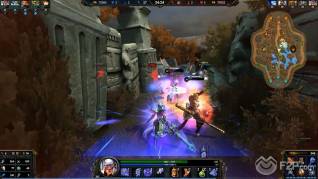 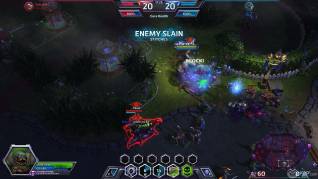 Some MOBA try to make bold statements by changing a primary feature, SMITE is a good example of this where the vast majority of MOBA (like nearly all of them) are isometric top down views of the map and battles, SMITE incorporated a 3rd person view for their game, instantly setting it apart from other MOBA and in turn appealing to a different type of MOBA player. It was the first game to go down the third person route, and whilst it had other differences in terms of features it fundamentally stayed as a 3 lane minion pushing hero smashing game. One of the newest games on the block that falls into the obvious success stories is Heroes of the Storm (HOTS) from Blizzard, having a company like Blizzard behind the title and an IP that borrows from Warcraft and Diablo for the main hero characters that players can fight as it’s no major surprise that the game is already pretty big even only recently coming out of beta.

Once more trying to pave their own way HOTS, as many other MOBA that have come out or are due to come out, have focused more on the casual gameplay in regards to match length; where DOTA 2 and LoL can have 40min matches on average, HOTS et al focus more on a 15 – 20 min match resulting from more instant action, less downtime in battle returning to bases and other mechanics to enforce it. HOTS in particular have gone one step further by adding in game changing objectives; whilst the primary goal is still to destroy the other teams base each map (and having lots of maps in itself is a unique feature for MOBA) has a different means to do this, whether collecting gems to summon powerful spiders that march down the lanes towards the enemy, or activating a shrine to transform a player into a powerful dragon.

These four are notably the biggest MOBA currently on the market, but there’s plenty of other MOBA to check out, all trying to find their own way and stand out from the crowd in small and even huge ways. Terminology plays a big part in what is considered a MOBA, technically it is a “Multiplayer Online Battle Arena”, but this now seems to be used for everything from RTS games to First Person Shooters, though many games try to find their own identity and get from under the shadow of the big games by calling themselves something different, such as a Hero Brawler, and with this and the constant effort to be different we’d say a few games have stepped a little away from the MOBA genre, losing lanes and minions and almost seem more like FPS games, so for the purpose of this article we’ll say that when we’re talking MOBA we mean team based battles across a zone where players can choose from different characters and level them up during the game… it’s a loose description, but blame the industry and developers for blurring the lines, not us! 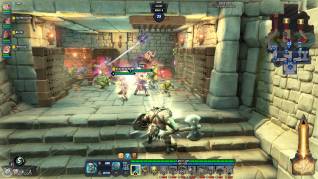 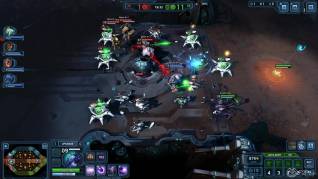 A key element that some newer titles have been focusing on is adopting the third person format, possibly the most notable difference to make a game feel completely different to LoL and DOTA2 in particular. King of Wushu is one of the newest titles that are looking to do this, combined fast action Wuxia style combat (Crouching Tiger, Hidden Dragon style martial arts fighting) the game is somewhat similar to the likes of SMITE, though initially is being released on PS4 first which is pretty novel in itself. Orcs Must Die! Unchained is another third person MOBA and does a great job of offering the core “attack the base and push lanes” element whilst retaining a fast pace hero vs hero dynamic but giving players customization over the minions that they choose to put in their waves as well as being able to place traps to stop enemy minions and players. Control over minions is a fairly untouched element and something Supernova goes to great lengths with, a futuristic traditional isometric lane MOBA that allows players to level up and choose the makeup of their minion waves, acting and reacting to enemy and allied player choices.

Supernova being a sci-fi game is one of the other popular methods a lot of new MOBA try to focus on and steering away from the “fantasy” magic theme, with the big 4 already taking up that spot we’ve seen Shards of War and Games of Glory all step up with more futuristic sci-fi theme; they are collectively unoriginal in their originality, but there’s only so much you can do. Shards of War is very similar in its gameplay to other MOBA, other than the theme it sticks fairly close to what we have come to love and expect of a lane based MOBA. In comparison Games of Glory, a futuristic “sport” where fighters battle to the death, primarily follows a point capture system but combines it with base pushing where capturing point drops the enemies’ defense shields giving temporary access to the enemy core; the primary structure in the bases that must be destroyed/ defended. 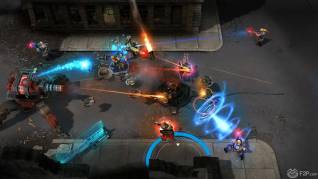 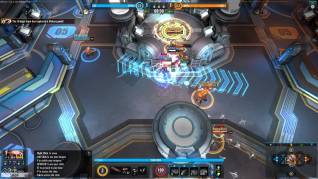 Point capture is something that has grown in popularity, where in traditional MOBA point capture was more for luring neutral camps of monsters to your side temporarily, some MOBA have made this the primary goal. Infinite Crisis is more true to the lane pushing element whilst retaining point capture in a game where players get to fight as and against various characters from the DC Universe including Batman, Joker, Green Lantern and more and also incorporates the “objective” based game modes with each map having different sub objectives to help win the game, though not quite to the extent and primary focus of Heroes of the Storm. However, we'll have to forget about it, since it's shuting down next month. Same as Merc Elite, an urban themed MOBA that focused on point capture and includes a pretty impressive cover system and higher ground mechanic combined with players choosing 3 characters to take into battle that they can switch between after each death.

Another urban point capture MOBA is CroNix Online, but this game takes its cues more from the third person shooter SMITE style MOBA and doesn’t focus on lane pushing, again crossing over that line where MOBA simply becomes a game consisting of a classic FPS game mode. Similarly with a more fantasy themed third person MOBA Gigantic, whilst it has a similar point capture the main focus is controlling a map leading up to a huge fight between each teams epic boss, instead of trying to destroy a core structure in a base, two teams build up the strength of their respective summoned giants over the course of the game for an epic showdown. As you can see as we draw down this list the MOBA term starts to get thrown around very loosely, but in its strictest sense in terms of team based arena battles even the likes of Total War: Arena falls into the category and is, as the root definition of an online battle arena, a MOBA game where players get to choose their own three squad units to control in a 10v10 player battle of two colliding armies and try to destroy each other or capture the enemy base. 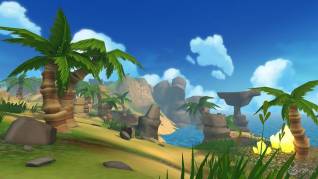 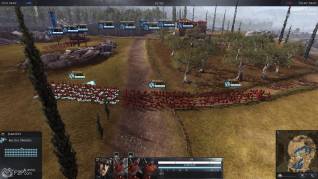 Finally, as if MOBA games slipping into other genres wasn’t confusing enough, we’re starting to see instances of other genres adopting the MOBA mechanics, particularly with the likes of R.O.H.A.N. 2 and Heroes of Rune. Both of these games play as traditional MMORPGs as their core genre, but Heroes of Rune has a separate MOBA Rune War style combat system using the same classes, but acting as a separate minigame. In comparison R.O.H.A.N. 2 has used the MOBA style lane pushing, turret destroying, get into the enemy base and cause havoc style mechanic for the core end game battleground PVP system.

So what defines a game as a MOBA these days? Who honestly know? There’s a growing cross-section we believe that see the MOBA genre as the new and exciting moniker that conjures ideas of exciting and fast gameplay, whereas other games that would sit firmly in the genre don’t want to be overshadowed by the title. As far as we’re concerned if you’re not pushing lanes then you’re not a MOBA, but everyone is entitled to their opinion; so let us here yours and tell us what your favourite “MOBA” is.