Nice diverse selection of classes which can be further customised with their own gear and abilities.

Feels a little difficult to play when starting out and not everything is obvious from the start e.g. how to heal yourself.

We recently took some time out to play at Square-Enix’s team based FPS vampire MMO Nosgoth where players get the chance to play as various different types of vampire versus human vampire hunters in a fast-paced team death match scenario. The top end graphics this free to play MMO runs and plays as a AAA title and write up top we’re going to say from what we’ve experienced from the game so far it’s well worth trying out. The game is currently in closed beta testing but looks to be readying itself for an open test phase. 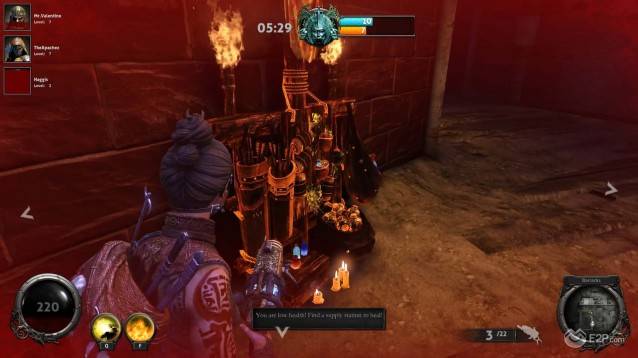 When we loaded into the game we were faced with four main tabs, the News section tells is everything that is going on with the game and the beta as well as new items that are being added all the time. Your Profile is an overview of how you have performed with the various classes for each faction, showing your player rank and also each individual classes rank and section to show your kills, score, time played as that class and other general stats. The armoury gives you an overview of the classes with a description of what each class can do, you’re crammed loadout of gear/weapons/abilities as well as any cosmetic skins you are using, some of which are currently locked. Finally the inventory much you have a quick look at all the items and gear you have currently earned for all the different classes.

Hitting the Play button we got to choose between a New Recruit Team Deathmatch (for players under rank 10) or a Standard Team Deathmatch, each being a 4 v 4 game, there was also a third grade out “Siege” game mode that we could not access. We jumped into the Team Deathmatch lobby (at least that’s all it was labelled, not sure if it was the newbie one or not) and had to wait for the teams to randomly fill up with players. When you jump into the game you are randomly assigned one of the teams, either vampires or hunters and get to choose which of the three classes you wish to play as well as organising your loadout, which you will be locked to the duration of the game. 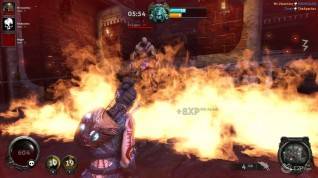 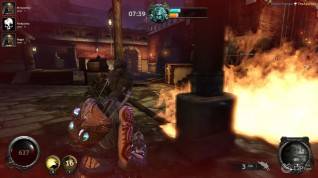 We jumped in as the Reaver, dextrous and able to use stealth they are fast and agile but a little weak when taking damage, are loadout’s were uncomfortable as we haven’t unlocked anything yet but our main ability was a pounce attack that we could charge up and then launch across the screen attacking distant enemies, pinning them to the floor and do lots of damage. Depending on where you are facing and targeting will determine whether your attacks hit, so some twitch-based skills are required with no auto attacks available.

The vampires were pretty fun to play as, swarming up walls and leaping from buildings to jump down on unsuspecting hunters was pretty exciting, as we were a little weaker defensively it meant often waiting on an upper level for your victim to come past before jumping down on them. The team earns points and XP with each killed they make and players must reach a final score before the game time runs out, once this happened one team wins the round (… not us I’m afraid) and then the team switch and we got to play as the humans. We played as the ranged Hunter, firing a huge repeating crossbow with bolas and explosive shots, considerably different from the melee focused Reaver, and in all honestly a lot more difficult. 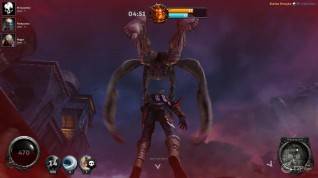 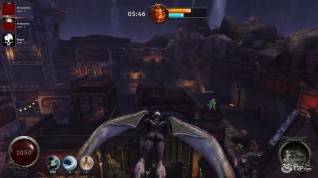 The game really focuses on team based play, the teams that seem to be the best is the one that sticks together. A vampire finding themselves alone confronted by a group of humans, or vice versa with a lone human against a pack of vampires, goes down pretty quickly. Vampires are able to replenish their health from the kills whereas hunters need to find med stations on the map, and nice tactical twist to the game to give something different to both sides. The graphics are pretty well done and have a few nice touches such as the bricks breaking away on walls is your vampire clans them, the terrain and map environments are well designed giving plenty of places to ambush your enemy as a vampire or little nooks to hide in as a human and bottleneck your opponent to your position.